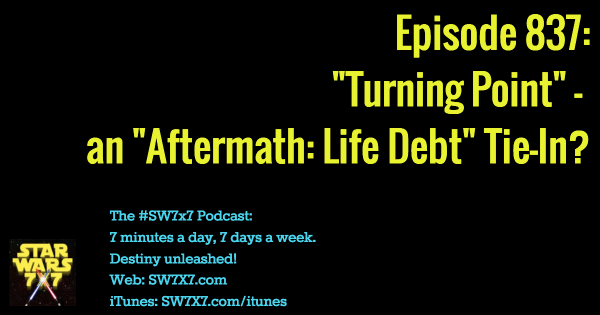 The new issue of Star Wars Insider – #169, hitting newsstands in late October – features the short story “Turning Point,” which is billed as a tie-in to Chuck Wendig’s Star Wars: Aftermath: Life Debt novel released earlier this year. But is it really?

I got a digital review copy of Life Debt, which is awesome because it let me search easily through the novel. And there’s nothing in there that jumps out at me as being tied in. I checked all named characters, locations, and creatures, and none of it appears in Life Debt. Maybe you could argue that the use of Wookiee bowcasters ties in, because a chunk of the action in Life Debt takes place on Kashyyyk. Or you could point to the ending (listen to the podcast if you want the spoiler), but Life Debt takes place about nine months after the ending of the story. (And no, it’s not at all a pregnancy thing.)

The story’s well-drawn overall, but frustrating in that it feels more like a chapter of a novel than a short story. It ends on a comparative cliffhanger, and you’ll want to know what happens next. (I sure do.) What did you think of it? Share your thoughts in the comments!

Yesterday’s answer: She “bypasses” the compressor