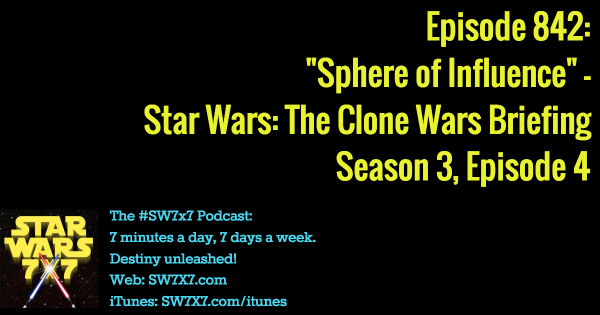 It’s time for another Clone Wars Briefing! This time, I’m looking back at “Sphere of Influence,” which is episode 4 of season 3 of the Star Wars TV series. (Here’s the full rundown on the episode from Wookiepedia – also, the source of that spaceship image.)

Here are five fun facts about the events of the episode:

2. Lt. Tan Divo returns to blow it again. The Coruscant detective – voiced by SpongeBob SquarePants himself, Tom Kenny – is assigned to investigate the kidnapping of Papanoida’s daughters, but he and his team utterly miss the one bit of evidence that would have been useful.

3. Papanoida can throw down. He looks like he should just be an old ruler of Pantora, but since he was played by George Lucas himself in Revenge of the Sith, I guess they weren’t going to let him be soft. He gets the jump on his daughters’ kidnappers not once, but twice – one of those times in Jabba’s palace! Jabba, clearly feeling his paternal instincts while playing with Stinky (you remember Stinky, right? From the ill-fated Clone Wars movie?) and apparently a friend of Papanoida (what are the Pantorans into, anyway?), lets Papanoida roll with his plan, and Greedo has to give up the daughter he has. Speaking of which…

4. Greedo is a coward. He’s as much of a loser as you suspected he was from the original Star Wars. Talks a big talk when he thinks he’s got the drop on you, caves in like a wimp when the tables are turned, sneaks away like a jerk when Papanoida and his son and daughter are shooting up his comrades. So much for honor among thieves.

5. Jedi rules? Feh. The other kidnapped daughter is found by Pantoran Senator Chuchi and her friend, Ahsoka Tano. Now, Anakin says the Jedi aren’t supposed to get involved in this kidnapping thing, because they’ve got bigger things with which to deal. But, wink wink nudge nudge, if Ahsoka goes on a “personal” mission, why, it’s quite all right for a Jedi to get involved.

I cover all of this in more detail in the podcast today. Plus, there’s the whole issue of an unlikely ending in which Ahsoka, Chuchi, and the other daughter should certainly have been killed in this episode, but weren’t. Have a listen, and if you don’t yet subscribe to the podcast on your favorite podcast app, please do!

Today’s question: What does Han say to Chewie, in a line of dialogue lifted directly from Star Wars, while they’re trying to take off from the Eravana and under fire from the gangsters?