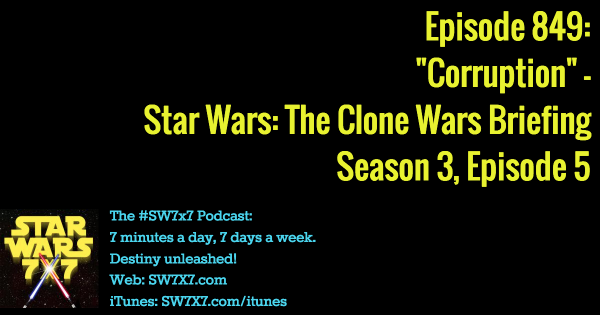 Hail, hail, the gang’s all here for a Clone Wars Briefing! Today I’m looking at “Corruption,” episode 5 of season 3 of the Start Wars TV series, and the first of a two-parter that focuses on corruption in Manadalorian government.

Yeah. You read that right. Not exactly what you would expect for scintillating cartoon fare for the sub-tween set. But it’s not really for the kids anymore, is it? 😉

The plot, in brief: Duchess Satine of Mandalore reaches out to her friend Padme Amidala for help. Mandalore won its fight to remain neutral in the Clone War, but now they’ve been cut off from supply lines and trade routes. Smuggling via the black market is the only way supplies are getting to Mandalore – which brings with it a whole new set of problems. (Here’s the full episode rundown for you from Wookieepedia, too.)

Case in point – smugglers cut a tea shipment with a toxic substance that poisons a bunch of schoolkids. Again, this is a cartoon for kids?! Satine and Padme investigate, and catch the smugglers and the corrupt duty officer and school superintendent responsible for what is essentially a terrorist attack on Mandalorian schoolchildren. Now, that’s entertainment!

All kidding aside, I liked the episode. It’s a welcome break in the wartime action of the Clone War – cleansing the palate, as it were. And as with much of the Prequel Trilogy politics, the conversation about corruption in the Republic and on Mandalore feels like it’s been ripped from our own headlines. It’s brave stuff for a cartoon to get into, in its way, and perhaps even braver for a Star Wars cartoon to do it. That said, it’s not like George Lucas isn’t political, and didn’t get into politics with his movies (he did, of course). And yes, Clone Wars isn’t run by Lucas, but it’s significantly impacted by his philosophies and storytelling choices.

Meanwhile, on an aesthetic note – isn’t Mandalore just amazing? I think the animation presentation of Mandalore is about as awesome as any cartoon depiction of a place as I’ve ever seen. I’d love to know what you think about it, too – have your say in the comments!

Today’s question: What’s Han’s answer to Finn’s question about how they caught all the rathtars?