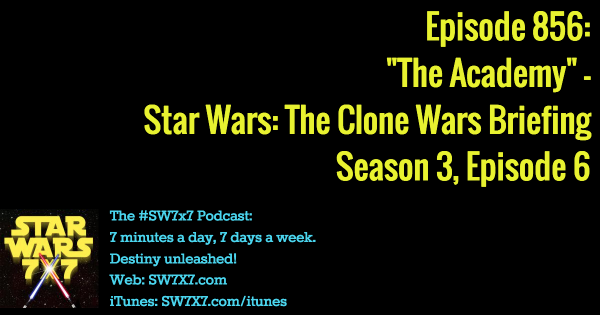 Welcome to another Clone Wars Briefing! This time, I’m looking at “The Academy,” Episode 6 from Season 3 of the Star Wars TV series. (Here’s the full episode rundown at Wookieepedia, from where the image comes, too.)

This is a quieter episode, in a sense. It takes place outside of the larger galactic conflict. Despite the fact that Mandalore is supposed to be neutral in the Clone War, Duchess Satine prevails upon her “friend” Padme Amidala to get the Jedi Council to send a Jedi to investigate corruption and the crisis that has cut off supplies of food and other necessities.

I dig into the whole of the episode on the podcast, but the big takeaway seems to be how important Mandalore is becoming to the franchise in general. The three-episode arc from Season 2 could have been the end of it, and we wouldn’t think much more of Mandalore. And yes, Boba Fett this and that, and I’m sure there’s a ton of Mandalorian stuff in Legends. But it seems like a different animal when it’s being taken to the level of the TV series, and we see that even now, with Sabine Wren and the focus on Mandalore coming up on Star Wars Rebels.

What did YOU think of this episode of the TV show? Have your say in the comments!

Today’s question: Which gang suffered more casualties from the rathtars – Kanjiklub or the Guavian Death Gang?