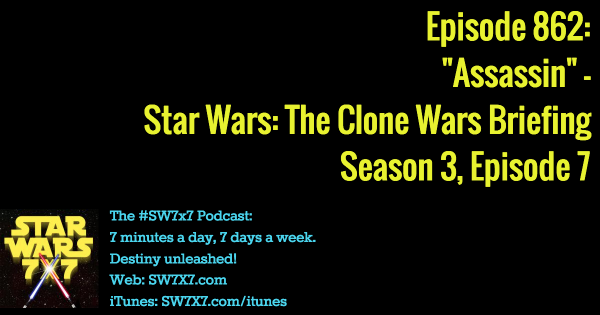 Welcome, welcome to another Clone Wars Briefing! Today I’m looking at “Assassin,” season 3, episode 7 of the Star Wars cartoon series. (Here’s the full rundown from Wookieepedia, from where the image also comes.)

The big takeaways from this episode are that Aurra Sing didn’t die at the end of season 2 of the series (Hondo pulled her out of the wreckage alive), and the fact that Ahsoka is starting to have visions and premonitions is a sign that she’s beginning to tap into the “true power” of the Force, as Yoda puts it.

Really? That’s tied into the true power of the Force? Fascinating stuff! Makes you think back to The Empire Strikes Back and Luke’s visions about Han and Leia. Yoda may have told him to turn his back on those visions, but not as a dismissal of them – he actually took them VERY seriously.

I’d love to hear your thoughts about this reveal as to the true nature of the Force – have your say in the comments!

Today’s question: With what kind of army does Kylo Ren threaten General Hux?