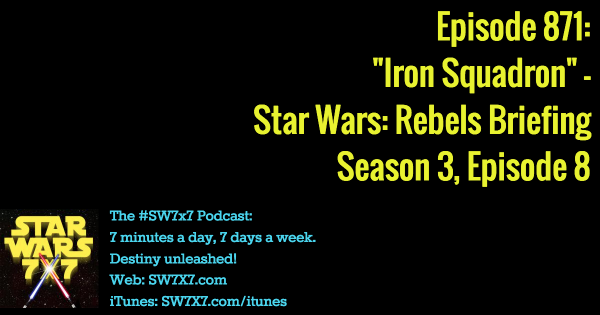 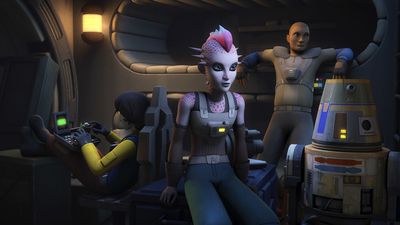 It’s time for another Star Wars Rebels Briefing! This time, I’m looking at “Iron Squadron,” episode 8 from season 3 of the Star Wars cartoon series, which premiered on Saturday, November 19, 2016. (Here’s the full episode rundown from Wookieepedia, also the source of the episode image.)

For me, it seems like the episode was an arrow headed specifically to create this exchange between Imperial Grand Admiral Thrawn and Rebel Commander Jun Sato:

THRAWN: Commander Jun Sato. I wondered what it would take to motivate your return to Mykapo.

SATO: And now you know, Admiral. Until we meet again…

THRAWN: Yes … until we meet again.

It’s another piece of the puzzle that Thrawn’s putting together, another milestone marker in his long game. I have to say, I’m ready for the long game aspect of things to coalesce into something a little more impactful. As in, a little less, “Yes, it’s all going according to my plan,” and more “Time to put this plan into action and stir up some chaos.”

In the meantime, the members of “Iron Squadron” are three kids – Mart, Gooti, and Jonner. Thankfully, only their first names are given in the episode, as the full names of two of them are dead giveaways or their real-life inspirations – Mart Mattin (for Matt Martin of the Lucasfilm Story Group), Gooti Terez (for Andi Gutierrez of The Star Wars Show and Rebels Recon), and Jonner Jin (for John Harper of The Star Wars Show). Sure, because I’m a Star Wars fan of a certain level of obsession, this is inside knowledge that would have taken me out of the story had I heard either Mart or Gooti’s full character names. Jonner, though, was definitely better named comparatively speaking.

A minor quibble in an otherwise intriguing episode that also sees Thrawn testing his own, this time Admiral Konstantine, who gets too cute in his attempt to destroy the Ghost and Iron Squadron, and pays the price for it.

What did YOU think of the episode? Share your thoughts in the comments!

Today’s question: Who are the three people with a writing credit on The Force Awakens?