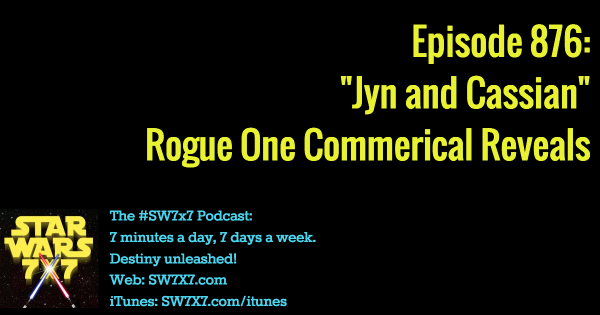 Are they trying to “ship” Jyn and Cassian on us in Rogue One: A Star Wars Story? In a commercial like this one, it sure does seem like it. The new dialogue we get could certainly be construed as being innocent military-comrade dialogue. But it also feels like it could carry double meanings. Have a listen to the podcast, and watch the commercial to which it refers, and let me know what you think in the comments.

BTW, that picture above? It’s a blink-and-you’ll-miss-it moment in the commercial, and it looks like Jyn and Chirrut holding hands. Considering Jyn’s mom Lyra and her “Trust the Force” line from the trailer, along with what we know about her Force appreciation from the novel Catalyst, coupled with what we know about Chirrut, seems to suggest that there could be an affinity between Jyn and Chirrut that hasn’t been shown to us yet…