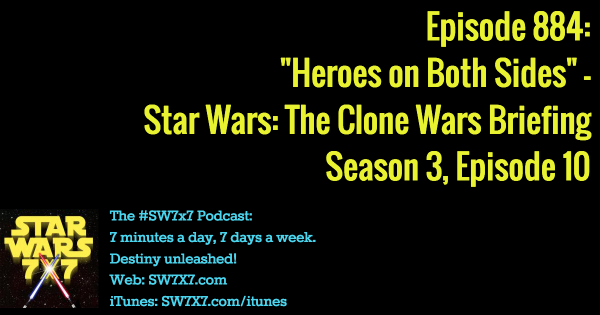 Welcome to our latest Clone Wars Briefing! Today, I’m looking at “Heroes on Both Sides,” episode 10 from season 3 of the Star Wars TV series. (Here’s the full episode rundown, which is also the place from where this photo comes.)

That phrase, “heroes on both sides,” was a bit of a sticking point for some when it wound up in the opening crawl for Revenge of the Sith. Maybe it was because, to the Separatists, Count Dooku was a hero? But as the episode goes on, it becomes clear that the “heroes” are seeking positive and non-violent ends to the war – not as a means of surrender, but that of negotiation.

That being said, it starts in a way that would give most Star Wars fans pause – an extended debate session inside the Senate about whether they should deregulate the banking clan to make it easier to get funds to order up more clones. Sounds as bad “the taxation of trade routes to outlying star systems is in dispute” from The Phantom Menace opening crawl.)

From there, the action speeds up. I’ve got it all in the podcast for you!

Today’s question: How many times does Han use Chewie’s bowcaster in The Force Awakens?