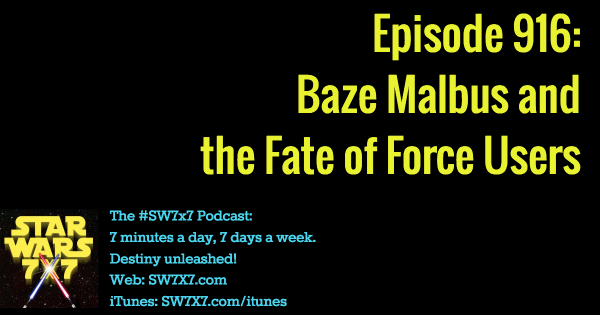 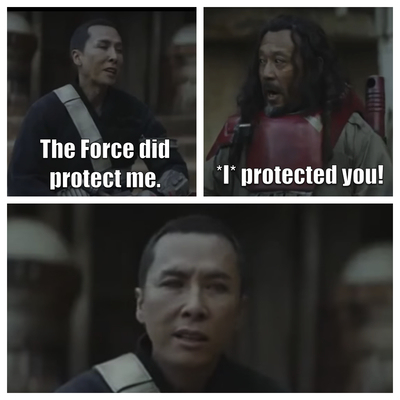 It’s one thing to look at the exchange pictured here and consider it from the perspective of Chirrut as Force user. It’s played as though Baze is NOT a Force user.

But what if he is?

Chirrut said Baze was once the most devoted Guardian of the Whills of all of them. Sure, that opens up the question of backstory – what happened that he’s not anymore – but it’s beside my main point, which is that to be a Guardian, you’d think that you’d have to be drawn to the kyber crystals they’d been sworn to protect. Drawn by the Force, attuned to it.

But for more practical matters – did Baze miss a single shot he took in Rogue One? I don’t think so. And he’s human, waving a giant cannon around. How does he kill that many stormtroopers so quickly on Jedha without hitting Chirrut and while waving a giant artillery weapon? I only see that happening with Force assistance.

Same thing on Eadu. Does he miss hitting a trooper while providing cover fire to Jyn and Cassian? Nope. I believe he does not.

I dig into this more in the podcast, including his sense of when it’s time to die, very much like the Jedi when Order 66 was executed. And I might realize in the process that I’m less than impressed by the Death Troopers, too. Thanks for listening!