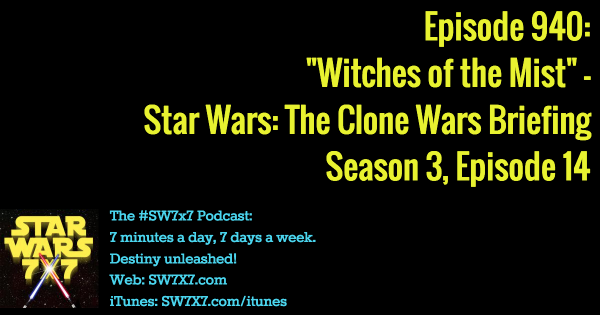 Welcome to another Clone Wars Briefing! Today we’re looking at “Witches of the Mist,” episode 14 of season 3 of the Star Wars TV series. (Here’s the full episode rundown on Wookieepedia, from where the image also comes.)

It’s the finale of a story arc that reveals the fate of Ventress’ plot to get revenge on Dooku for ditching her as an apprentice and leaving her to die in the midst of a battle. Savage Opress gets more savage under Dooku’s tutelage, but after being tortured by Dooku and played by Ventress, he runs back home to Dathomir, where Mother Talzen tells him to go seek out his “brother,” still alive somewhere far from the center of the galaxy.

And that brother appears to be none other than Darth Maul. How the holy heck could he have survived his injury from The Phantom Menace? I mean, his body was split in half! We’ll have to wait for the answer, because it’s not forthcoming in this episode…

What did you think of it? Have your say in the comments!

Today’s question: How many TIE Fighters did the Finalizer scramble to shoot down Poe and Finn’s TIE?