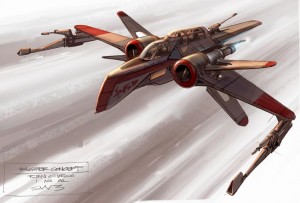 Happy birthday to Ryan Church, the Concept Design Supervisor responsible for much of the look and feel for Attack of the Clones and Revenge of the Sith. The entry for him on Wookiepedia IDs him as the artist who probably had the most influence of any individual on the worlds of Episodes II and III. Although he specializes in futuristic vehicles and spacecraft (like the ARC-170 pictured here), his contributions run the spectrum of design, from planets to characters.

Jon Stewart challenging me to a Star Wars Trivia contest? That’s like bringing a Serraknife to a Slugthrower fight! http://t.co/pSBG22Puq0

Today’s question: Who was first to ignite his lightsaber during the duel in Cloud City?

Let me take you back to the summer of 1993. For those listeners who don’t have the dates off the top of their heads, that was 10 years after Return of the Jedi was released, four years before the Special Editions were released, and six years before Phantom Menace. In other words, the dark times. Oh sure, the Timothy Zahn books had come out, and that was exciting, but they weren’t movies, and that’s what we’re talking about for the time being.

I was working in one of the cafeterias at my college, and there were a couple of students from Canada interning at the cafeteria, people getting degrees in hospitality management, if I remember right. One of them was a gal from Saskatoon, Saskatchewan. It’s a decent sized city, a couple hundred thousand people. And she revealed a shocking truth to me – that she’d never seen any of the Star Wars movies.

Well, I certainly couldn’t let her leave the US without correcting that, could I? So I invited her over to my apartment one night, and she said she was game to watch all three in a marathon session.

She wasn’t all that impressed by Star Wars, and fell asleep on the couch during Empire. Well, heck, it’s not for everyone, somehow.

But that was the last time I ever met anyone who said they’ve never seen a Star Wars movie. 21 years ago.

Oh sure, I’m a dad now, and I’ve known other dads at times who hadn’t shown Star Wars to their kids yet, but that doesn’t count. And by the way, it’s not because they don’t want to or don’t plan to. Quite the opposite. They’re waiting for the right moment. They want to make sure they time it right, to give their kids the ultimate opportunity to get the same thrill from it as they did. It’s not limited to dads, of course, it’s moms, too, but dads are who I happen to talk about it with more often.

The point is, whether it’s with the circle of people you know, or it’s any of the forums we talked about in this week’s episodes, there are people who are ready and willing to talk to you about Star Wars at every minute of every day, in every civilized corner of the planet. What other entertainment phenomenon can you say that about? When you say, “May the Force be with you,” EVERYONE knows what you’re talking about. Is there another entertainment property you can say that about?

No Marvel or DC superhero catchphrases are anywhere near that pervasive in society. Not Harry Potter. Maybe the closest option is James Bond, but it’s only because he says, “Bond. James Bond.” He’s just repeating his name! And probably the reason it stuck is because it’s been parodied endlessly, just like Michael Keaton going, “I’m Batman” back in 1989.

No, the nearest cultural touchstone like that could be Casablanca, “Here’s lookin’ at you, kid,” and all that, but even that one is fading away, into the mists of time.

When’s the last time YOU met someone who hadn’t seen a Star Wars movie? Let us know in the comments!