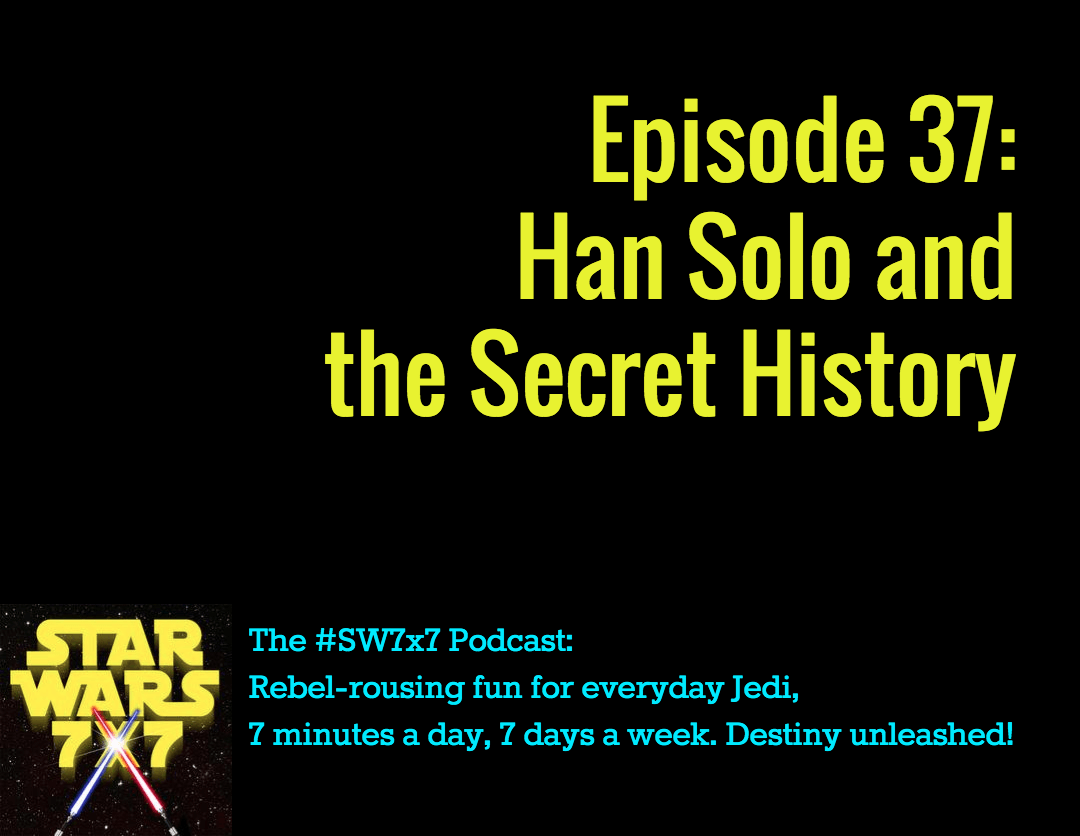 In the Expanded Universe, it took four years for Han to make Leia an honest woman, and they had three kids together: twins Jaina and Jacen, and their youngest, Anakin.

What do you call a Jedi wearing a sombrero? Obi-Juan Kenobi

Today’s question: What type of machine on the first Death Star bore the unit number 3263827?

Can I tell you why I like Han Solo as much as I do? It’s all thanks to Brian Daley.

I should back up, though, and make it clear that I liked Han Solo from the start. I was an only child, I am an only child, and back then, I could imagine that being what having a good older brother would be like. Always cooler, always cockier, always seemingly more capable and in control. With his own car, his own money, and his own history before the little brother ever came along.

Funny thing, I see that now in my kids, the way my younger son looks up to his older brother, wants to be around him all the time, thinks he walks on water. Although, ironically, if they took a “Which Star Wars personality are you?” test, the older boy would likely come out as Luke, and the younger one would come out as Han. Or maybe even Lando, heaven help me.

But back to Brian Daley a bit. I don’t have to remind our more seasoned listeners that, back in the day, Star Wars content was hard to come by. Splinter of the Mind’s Eye came out in 1978, and I devoured that. I had some kid’s records and read-along books, and the “Star Wars Storybook” you could order from Scholastic, but nothing could have prepared me for Han Solo at Star’s End, Han Solo’s Revenge, and Han Solo and the Lost Legacy.

One of my most vivid memories of being at my grandmother’s apartment includes Han Solo’s Revenge. There I was, lying on her couch on a blistering summer’s day in Panorama City, CA, air conditioner running full blast, while she smoked and watched the ABC soap operas from her armchair.

Much like my younger son, who can’t sit in one place on a couch and just stay there, I bounced and rolled all over my grandmother’s couch while I read the hardcover copy of Han Solo’s Revenge I’d gotten from the library. I remember thinking that they should have made a movie out of that book, because there was so much action in it. And it had a sense of danger greater than that of the movies. When a sleeper bomb goes off and damages the hull of the Falcon, I had that “Holy crow, nothing is safe!” storytelling moment for the first time in my life. You know the one, where suddenly, truly, anything could happen?

Do you remember that book, or any of the other Han Solo Adventures from ‘79 and ‘80? Share your memories in the comments!

That was really the start of the “Expanded Universe,” and I loved it because it was like discovering the secret history of these characters, who definitely had a history of note. Luke didn’t have a history like that. Leia may have been caught up in some adventures, but she was too young to have an elaborate backstory.

I haven’t read much of the newer Expanded Universe stuff – oh, I jumped on board immediately with the Timothy Zahn trilogy in the early 90s and the one-offs that followed, but eventually it became too much to keep up with. It was almost better when the saturation wasn’t there.

But Han will always have a special place in my fandom because of the Brian Daley books, and of being able to hear Harrison Ford’s snarky voice and Chewie’s growls in my head as I read them. Back then, that was “canon,” that was the official backstory on Han, and it was every bit as cool as I’d hoped, as cool as the movies wanted you to believe about him.