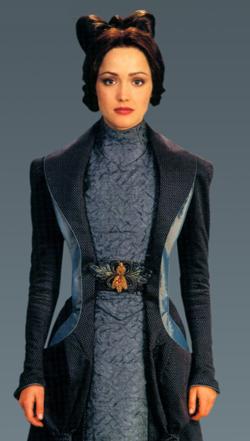 It’s another handmaiden day! This time we celebrate Rose Byrne, who played Dormé in Attack of the Clones. Just how many handmaidens did the queen have, anyway?!

I like sending Rebel scum postcards from Alderaan saying: “Wish You Were Here?” #starwars

Today’s question: Whose scum-coated tongue flopped out of his mouth as he drew his last breath at the Sarlacc Pit?

Force Feature: Mistakes in Attack of the Clones

We’re talking movie mistakes this week, and looking deeply into the eyes of Attack of the Clones. Now, of course, these are all visual things, so we’ll have the images linked from the blog post for this episode. I’m gonna share 7 of my favorites from MovieMistakes.com, and if you have others that you love, please add them to the comments for the episode post!

#1: Magically appearing youngling! How does the alien youngling shows up out of nowhere is anyone’s guess. Oh, wait a minute, it’s because he’s digital, right? I guess that’s what happens when you use pixels instead of people. They get flipped on and off like a switch.

#2: Hey, where’d the chain go? It’s a good thing the Geonosians had a spare chain for Anakin before they hooked him up to the pillar in their coliseum. There was a chain there as they’re leading him up to it, and they hook him into a chain, but then his captor inexplicably has to fly the chain up to the top to secure it. Where did the first chain go?

#3: Force pear tricks. Using the Force to manipulate minds is one thing, but using it to manipulate pears is quite another. Anakin slices a pear-like fruit in half, but somehow manages to levitate a much smaller slice to Padme. Meanwhile, the part of the pear on Anakin’s plate has actually gotten bigger than the original half. Only a Sith would practice this kind of unnatural act on an innocent fruit.

#4: Disappearing antennae. Bad drivers abound in the Star Wars universe. People crashing into each other, crash landing, and smashing into things. But none of these explain what happened to the antennae on the car Anakin hijacked to chase after Zam Wessel. One shot, they’re there, next shot, they’re gone. Oh, and I guess the Jedi are authorized to commandeer vehicles at their whim. One of the lesser-known benefits of the Order!

#5: What is this, the 50s? Behind Chancellor Palpatine’s window, you can see Coruscant sky traffic going by…or maybe what you’re seeing is a giant painting on a rotating wheel, because the pattern repeats throughout the shot. You see the same ships again, in the same exact formation. Not a bad bit of flying!

#6: More crazy shadow action. Anakin and Padme must have been hugging for a long time. A long time. Their shadow moves around along the outside wall of the Lars household between shots.

#7: Another shot flip! How does this keep happening?! When Obi-Wan’s getting the tour of the clone facility on Kamino, his lightsaber is on the right side in one shot, and on the left side in the other. I’m beginning to suspect that this is some inside film editor’s joke, to see how many times they can flip a shot in a movie without any of the rest of the movie production team noticing.

Again, these are just seven of my favorites, and if you want to go deeper, there are a few more photos, and dozens upon dozens more mistake notes, linked here. Enjoy!