Poor Return of the Jedi, saddled with the weight of its story obligations. It was the first one I can actually remember seeing, so it’ll always have a special place in my heart. And room for the Ewoks, too.

What did YOU love about Jedi? Do you remember seeing it in theaters? What drives you nuts about it? Comments are open for you!

Happy Birthday to Star Wars artist and illustrator Rick Hoberg! Check out a sample of his work:

A new edition of Empire Strikes Back where Luke falls down the shaft, except he’s wearing a Mentos suit and there’s Diet Coke at the bottom.

Han Solo in Carbonite Rugs – click on the pic! 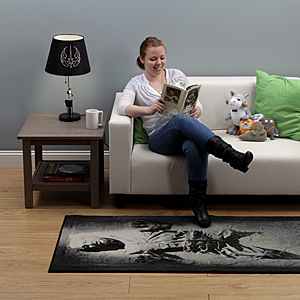 Today’s question: Who claimed to have flown “from one side of the galaxy to the other”?

Force Feature: Return of the Jedi

All good things must come to an end, as the saying goes, and Return of the Jedi gets the thankless job of tying up the loose ends.

This was the first of the Star Wars movies I actually remember seeing in the theater. It came out on Wednesday, May 25th, 1983, and my mom took me out of school on Thursday the 26th to see a matinee. We were practically the only ones in the theater, which made no sense to me at all. Even at 12 years old, I had enough sense to know that there should have been crazy lines outside, and that we must have found some secret movie theater that no one was paying attention to, or that people didn’t yet know they were showing Jedi.

And somehow, my mom figured out how we could buy tickets for the matinee and still stay inside the theater to watch it again, despite the fact that there was no crowd to hide in. So yes, I watched it twice in a row on the day after Opening Day.

I wanted more crazy flying things, and I got it with A-wings and B-wings and capital ships, and of course the ULTIMATE, speeder bikes. That scene just blew my mind, and I remember watching something on TV about how they shot those scenes, with a guy and a steadycam harness walking through the forest, and it did not diminish ANY of the movie magic for me.

Ewoks, though…Ewoks caused a lot of problems for people. For adults, at least. Hey, I was 12, I was pretty innocent compared to others my age, so I bought it. Now that I’m grown up, and I can think critically about Lucas and his growing love for merchandising sales, I know that A) he’s pretty smart about the merchandising and licensing stuff, and B) just because I THINK he did Ewoks only for the payday (as opposed to some other crazy alien race it could have been), doesn’t take away from my enjoyment of seeing them chop ropes to smash a Scout Walker’s head between two giant trees, and take out Stormtroopers with rock slingshots. It’s science fantasy, not science fiction, after all.

We only had action on two fronts at the end of the last movie with Luke versus Vader and Lando, Leia, and Chewie escaping. This time we get action on three fronts, with the space battle, the shield generator battle, and the throne room battle. That was a pretty amazing feat at the time, the equivalent of non-stop action. In that sense, Lucas had saved the best for last, and went out with a bang.

You must have known, like I did going in, that it was the last in a trilogy, so you also probably had certain expectations of how the movie would turn out. Considering that it had to resolve Luke’s issues with Vader, the question of Han’s survival, and the presumptive victory of the Rebellion (good guys always win, right? Especially after they spent so much time losing in the last movie), all you could really hang your hat on was the “how” of how they would pull it off. And just because it’s my least favorite of the original trilogy, that isn’t a knock on it. They did a great job wrapping everything up neatly into a little bow.

Previous Post: 2: Empire Strikes Back, Best Star Wars Movie of All?
Next Post: 4: The Phantom Menace, Better Than You Think?