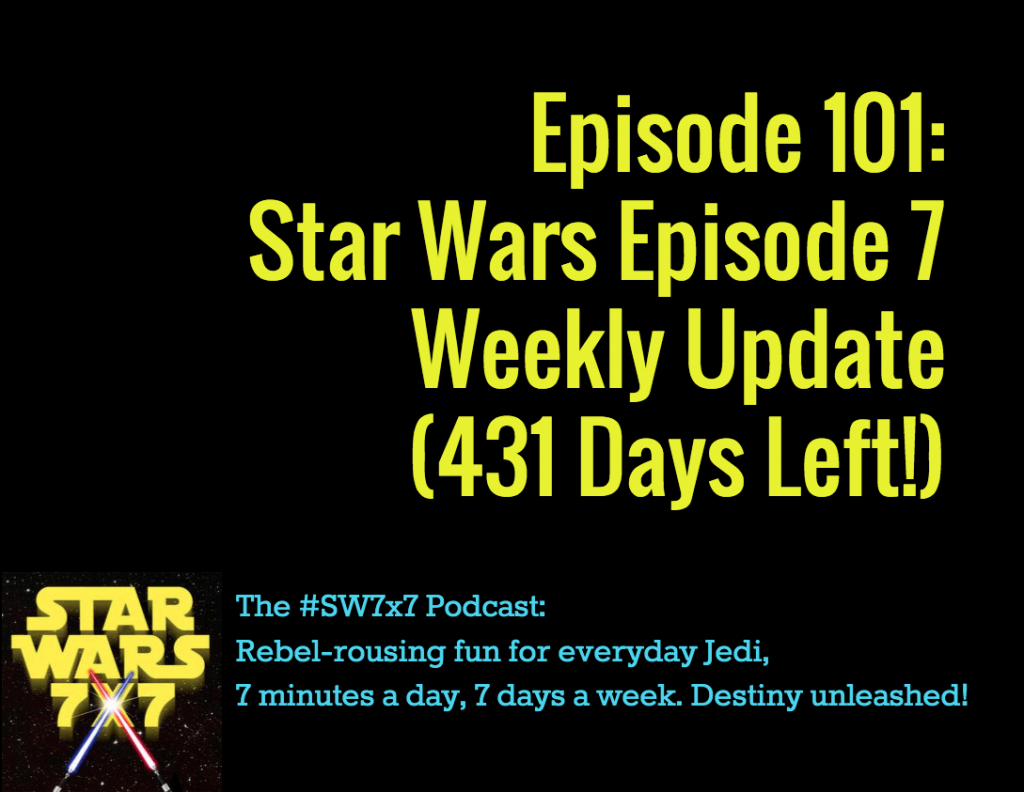 Star Wars Episode VII. We’re at 431 days left, and I don’t know about you, but I’m ready for something big. Not spoilers or rumors or anything like that. I’m ready for an official bone to be thrown. Updated cast photos. The official name of the movie. Another sly picture from Bad Robot on Twitter. Something, anything!

This past week, the biggest news in the rumor mill has been about concept art that we can’t even see, because it’s being textually described only. It’s starting to drive me batty. Concept art is one thing, and of course there’s this to consider: Just because concept art gets leaked or shared, that doesn’t mean it’s what’ll end up in the final film. I’m not saying that to cast aspersions on the veracity of any of these concept art leaks. Far from it, as the art leaks tend to arrive with information from the leaker to prove their value. Though it’s worth noting that all sorts of concept art gets made that doesn’t look like what the final film looks like.

What I’m saying is that it’s one thing to see concept art, and another thing entirely to see actual photos. And I’m ready for actual photos. Beyond ready, in fact. The best things I’ve seen so far are the Millennium Falcon and X-wing photos, followed closely by the new stormtrooper helmet. Those, at least, are tangible.

That said, let’s get to the intangible. Rounding up the rumors:

Sam Jackson says he’s definitely not appearing in Episode VII, despite rumors to the contrary. And Robert Downey, Jr. has also shot down the rumor of his appearing in any sort of hidden role. So much for that! Now we’ve just got to eliminate Hugh Jackman, Roger Moore, and any other James-Bond-connected actors, and things will be back to normal.

James Earl Jones, who had said he hadn’t been approached by Lucasfilm about Episode VII, has in fact been approached to do a bonus scene being inserted into the primetime re-airing of the Star Wars Rebels pilot on ABC. Which is, of course, leading to wild speculation that he’s also been asked to do Vader voiceovers for Episode VII. Speculation only, no actual rumors yet. Let’s not forget that flashbacks are rumored to be a part of the movie, and Carrie Fisher’s daughter has been cast in the Episode VII, too.

According to a poorly written report that identifies Harrison Ford’s character as “Hans” Solo, Ford has finished filming his scenes for Episode VII. And Oscar Isaac is yet another actor whose part in Episode VII is done shooting…the more of these notices we get, the closer we get to our first trailer…

Jason Ward of Making Star Wars has been posting near daily updates about concept art he’s seen of various aspects of the film, but more importantly, if you heard last week’s episode, or have been surfing the rumor mill yourself, you’re aware that a major rumor-slash-spoiler is making the rounds about the ending of Episode VII. There’s a post at Making Star Wars about the decades-old evidence that exists to support the idea that Lawrence Kasdan might want to go in the direction this spoiler is proposing. Possibly the best out of that post is the clip from an episode of the Jon Favreau show Dinner for Five, from June of 2005, guest hosted by Kevin Smith. And shockingly, Mark Hamill and J.J. Abrams appear together in this episode! Not to mention another pivotal man who had yet to play a role in the wonderful world of Disney: Stan Lee, the Marvel Comics magic maker.

But here’s what I consider the best news to come out in the past week, and it relates to the music of Star Wars. At a concert in Milwaukee, John Williams announced that he’ll be starting his work on Episode VII in about a week from now. I know I said earlier that the more actors we have finishing their shoots, the closer we get to a trailer, but when I heard that tidbit about Williams, I had shivers go up and down my spine, thinking about the “Duel of the Fates” music video, and hoping we get something as incredibly cool as that to help us make it through these dark times before the debut.

Surprising or little known Star Wars tidbits, sometimes related to today’s Force Feature.
Spitting image! Wayne Pygram looks just like a young Peter Cushing, doesn’t he? Young Grand Moff Tarkin from Revenge of the Sith is celebrating a birthday today, and Tarkin is the subject of the 2nd new canon novel, Tarkin by James Luceno, due out at the beginning of next month!

In fact, the opening crawl from the book has been released, if you’d like to check that out…

Excited to be here at Pinewood, but mum’s the word… http://t.co/DjqT06zxm3

Today’s question: Who’s the first character to say “May the Force be with you,” in The Empire Strikes Back?