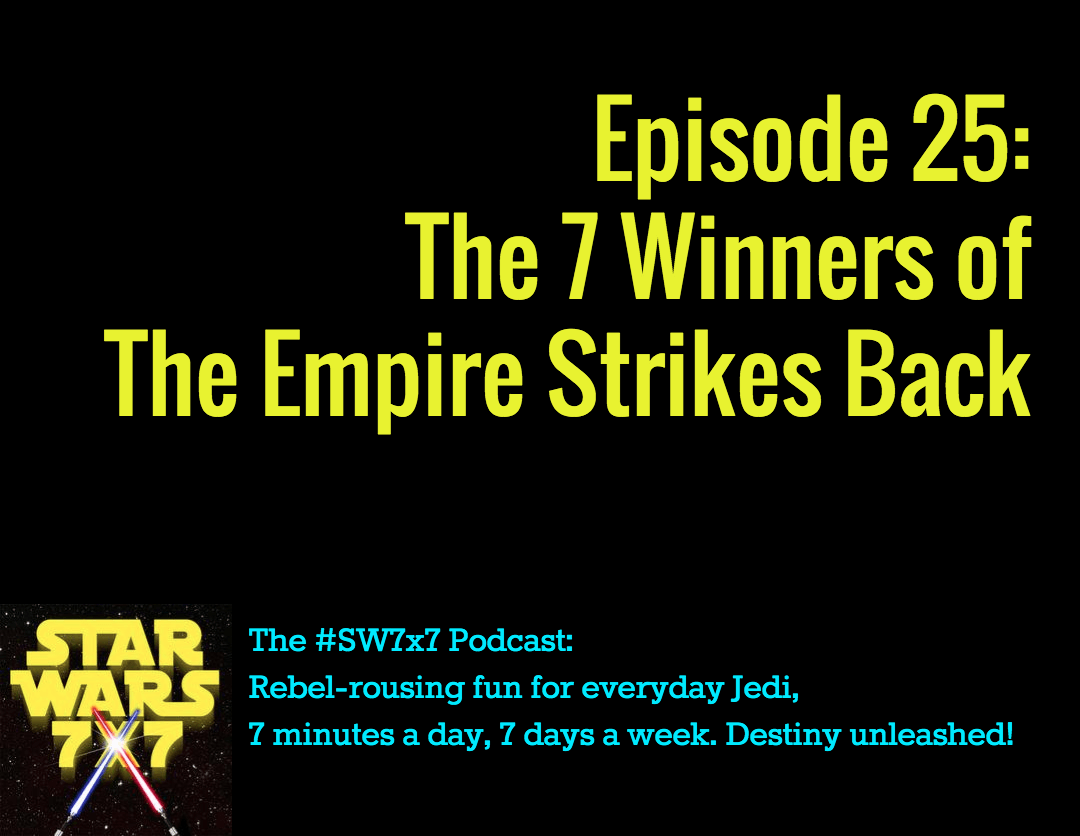 The illustrious David Warner celebrates his birthday today, and the gamers among us who loved Star Wars: Force Commander will know him has the voice of Grand General Malcor Brashin from the game. And since he never appeared in a movie or cartoon, he’s now considered a “Legend,” non-canon figure. Who are some of your now-“Legend” characters in the Star Wars Universe? Have you say in the comments!

To all the fly cos-play ladies up at #SDCC…. you’re welcome!!

S is for Star Wars Kids’ Tees – click the pic!

Today’s question: Who said of Luke, “All his life, he looked away…to the future, to the horizon”?

Force Feature: The 7 Winners of The Empire Strikes Back

Today, we’re talking about the winners in The Empire Strikes Back – the folks who came out on top, in a better position because of the events of the movie, or who were just plain luckier than they had any right to be. The one ground rule of this is that the winner had to either appear or be mentioned by name in the movie to qualify.

#7: Han Solo. At the start of the movie, he’s looking like he’s on the losing end of the love triangle. By the end of it, he’s got Leia wrapped around his finger. Better yet, by getting frozen in carbonite, he’s pretty much made sure that Luke has no chance of getting back in on the action, even while he’s out of commission. He could teach Lando a thing or two about smooth.

#6: Darth Vader. You gotta figure the Sith had settled into a cushy Galactic Empire thing before the Death Star blew up. Now they’ve got multiple reasons to be back in action! Last movie, Vader was on the sidelines. This movie, he’s relevant, he’s universally feared, and he’s front and center in the fight against the Rebellion. Choking people, springing traps, aaaaaannnd, he finds out that he’s a dad! Clearly, Obi-Wan didn’t completely dismember him. Sorry, I know, I couldn’t resist!

#5: Yoda. After a long time of watching Luke from afar – how does he DO that, anyway? – he finally gets the fledgling Jedi in his clutches. And he trains Luke well enough so that, even when he abandons the training, he doesn’t get himself killed by his own recklessness. As Leia would say, “It could be worse.”

#4: Captain, then Admiral Piett. How the heck does he avoid getting Force-choked? He’s the one who told Vader, “We have them!”, talking about the Millennium Falcon, when clearly they didn’t have them. And even though he promised Vader the hyperdrive on the Falcon had been deactivated, and Vader told him not to fail him again, the Falcon got away, and Vader sulked back to his meditation chamber without crushing a single windpipe. Piett’s a survivor.

#3: General Veers. As opposed to Piett, who’s failing upwards, Veers runs the only successful operation an Imperial officer has ever run so far, blowing up the power generators and driving the Rebel forces into retreat.

#2: Toryn Farr. That’s the name of the communications officer and commander of the ion cannon – you know, the one that can take out Star Destroyers in orbit! Thanks to her, as many as thirteen transports got safely away from Hoth, and she survived the battle, too. She did more damage to the Imperials with that cannon than the whole rest of the Rebel army did.

#1: Lando Calrissian. Here’s a dude who’s one messed-up mocha latte order away from a full-blown mid-life crisis. He’s been trying to tell himself that he’s cool with settling down after spending his younger days gallivanting across the galaxy. But he’s getting stressed out by labor disputes and supplier problems, and the constant threat of the Empire shutting him down. Then the Empire shows up, and instead of it being the worst thing ever, it lights a fire in his belly, and he gets to swashbuckle all over again. He even gets the Falcon back, and Han’s clothes are a perfect fit!

So that’s my list of the top 7 winners for The Empire Strikes Back! Who else should be on the list? Have your say in the comments!