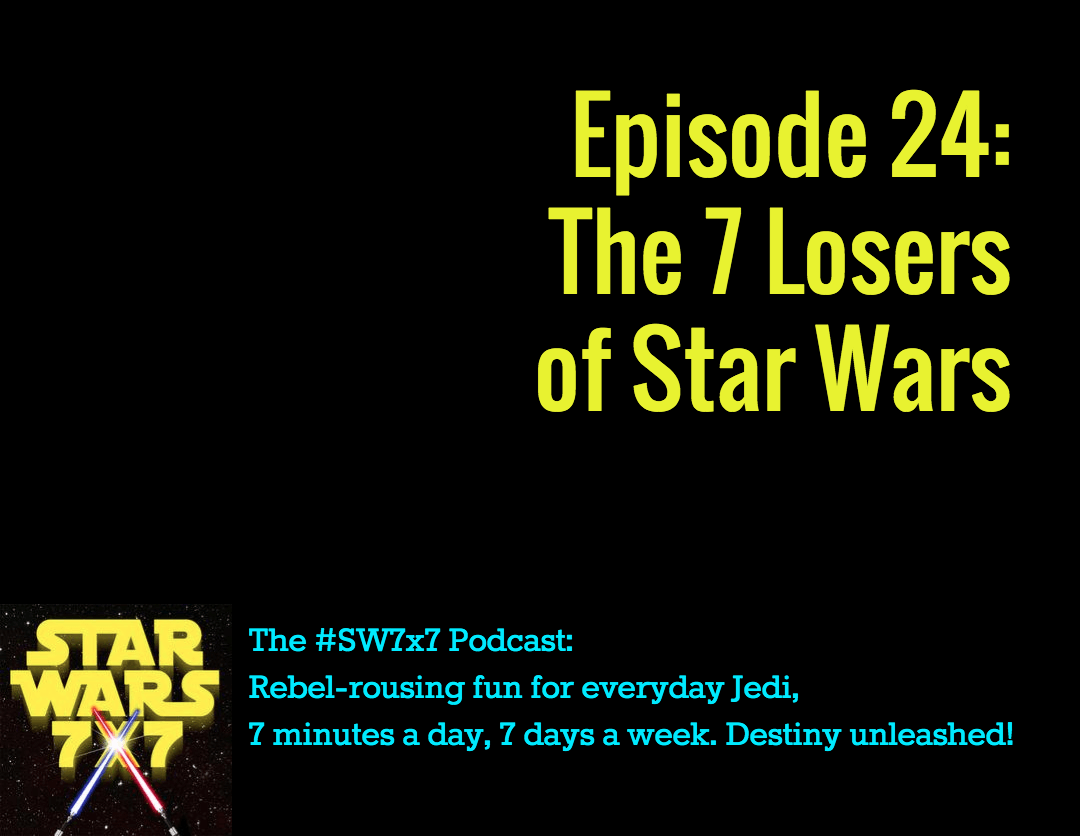 Happy birthday to Drew Karpyshyn! (That’s a very Star Wars-looking last name, isn’t it?) He was the Senior Writer for Star Wars: Knights of the Old Republic and a writer for the MMORPG Star Wars: The Old Republic while he was with the game maker BioWare. And he used that experience as a jumping off point to write a bunch of Old Republic novels, too. Good for you, Drew!

Today’s question: Who was the first Rebel snowspeeder pilot or crewman seen killed in the Battle of Hoth?

Today, we’re talking about the losers in Star Wars – the folks whose fates and fortunes took a turn for the worse as a result of the events of the movie. The one ground rule of this is that the winner had to either appear or be mentioned by name in the movie to qualify.

#7: Stormtroopers. The footsoldiers of the Empire had three golden chances to foul up the plot to blow up the Death Star. They were hot on the trail of the droids with the plans until a crazy old wizard bent their brains around his finger. They couldn’t stop the Millennium Falcon from blasting out of Mos Eisley. And they shot more rounds at our heroes on the Death Star than all the ammo shot in the entire run of the A-Team, and couldn’t hit a thing. Fail.

#6: Han Solo. He had his swank bachelor pad just like Chevy Chase’s houseboat in Foul Play, and his best buddy who was also his total life slave and bodyguard, and could come and go as he pleased. Now, he’s got a bigger target on his back than he did before, and he’s got more friends that can be used against him. Mo’ money, mo’ problems.

#5: C-3PO. First of all, how does he “forget” that he hates space travel? He’s a droid, that should be easy for him to remember! Well, he gets a week filled with it, including a crash landing in an escape pod, getting fired on twice by TIE fighters, and plowing through a planetary debris field. Plus, he nearly gets his joints frozen and loses an arm on Tatooine, spends most of his time insulting his only companion only to be unmasked as desperately, clawingly needy and insecure.

#4: Ponda Boba, aka Walrus Man. For picking on the wrong dude in a bar. He also becomes the next in a long and hallowed tradition of dismemberment in the Star Wars movies. Which, when you think about it, makes perfect sense. If you’re gonna have swords in a movie, stuff has to get cut off, right?

#3: Pol Treidum. He of the “TK-421, why aren’t you at your post?” And what does he get for doing his job? He gets sucker-punched to death by a Wookie.

#2: The Devastator gunner’s supervisor. Really? Not shooting an escape pod because there were no life forms aboard? D’oh! What was he saving the ammo for, anyway? Maybe he was a Rebel spy or sympathizer. In fact, the guys in the Star Wars Minute podcast have identified a number of bumbling Imperial officers who may secretly have been spies.

#1: Everyone on the Death Star. And I’d rank them in order of pay grade. Smallest losers? The military command, because hey, that’s life in the big army. Biggest losers? The cafeteria staff. This must have seemed like a plum assignment, like it was the safest Imperial job in the universe. And all of a sudden, blam, you and your eggplant Parmigiano find yourselves floating home.

So that’s my list of the top 7 losers for Star Wars! Who else should be on the list? Have your say in the comments!