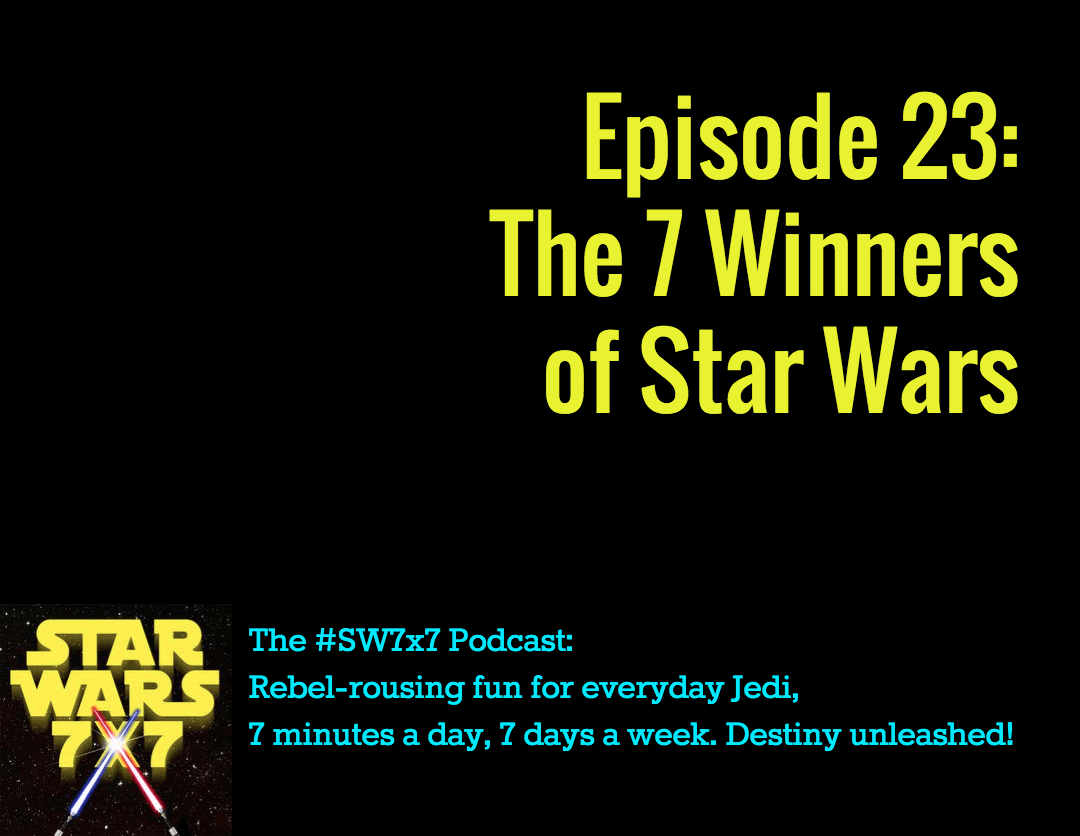 It’s Gary Kurtz’s birthday! For those of you who need the reminder, Gary’s the guy who got two Oscar nominations for Best Picture, as producer for Star Wars and The Empire Strikes Back. He also claims that he quit producing for Lucas because, after Empire, Lucas claimed the audience only cared about thrills and not the story, and began to prioritize toy merchandising over storytelling. Do you think he’s right? Have your say in the comments!

Yesterday’s answer: Sand People, or Tusken Raiders if you prefer

Today’s question: What were the last spoken words in Return of the Jedi?

Today, we’re talking about the winners in Star Wars – the folks who came out on top, in a better position because of the events of the movie, or who were just plain luckier than they had any right to be. The one ground rule of this is that the winner had to either appear or be mentioned by name in the movie to qualify.

#7: General Dodonna. Star Wars was a big deal for him for several reasons. First off, he was a retired Imperial naval officer who disliked the Imperial regime, but refused to join the Rebellion until the Empire decided to assassinate him. The Rebels helped him escape, and years later, his brilliant plan of attack on the Death Star led to a sweet, sweet revenge.

#6: Princess Leia. Bail Organa’s rebellious (pun intended) diplomat daughter proved that she wasn’t just a convenient cover story for the serious work of the Rebellion. She got the Death Star plans to Obi-Wan as intended (with a little help, of course). She got Luke, Han, and Chewie out of a trap (into another one, yes, but with better odds of survival). And she delivered the Death Star plans to Dodonna despite being tortured and having her whole planet destroyed. Now that’s a lotta spirit.

#5: Han Solo. He got all the money he needed to pay off his debts to Jabba the Hutt, and then some. But more importantly, he made friends with new people! And his heart grew three sizes, too. Not to mention his own bit of sweet revenge, against the military that had ordered him to skin Chewbacca alive before he conscientiously objected and took off with his new life-indebted Wookie pal.

#4: Luke Skywalker. How sweet is life for Luke? Last week, he was thinking he’d be hopelessly stuck tending moisture vaporators for another whole season while all his friends left to do cool stuff. Then he meets a crazy wizard, stormtroopers destroy the source of his guilt complex, he rescues a princess and becomes the most famous hero of the Rebellion. Best week ever!

#3: Darth Vader. The world’s most beloved and revered movie villain was just Grand Moff Tarkin’s lapdog in Star Wars, the last of an all-but-forgotten religion condemned to doing circus tricks like choking a guy with his mind. Then you find out he had a history with Obi-Wan and you think, hmmm, maybe there’s more to this guy. Then he turns out to be a hotshot fighter pilot who shoots down half a dozen Rebel ships himself, much respect, mon. THEN he discovers a Force-sensitive pilot in the Rebellion, and suddenly, he’s not alone in the Universe! He survives the Death Star skirmish, too. That’s a pretty big day you had, Darth.

#2: Death Star escapees. Okay, so technically this isn’t “canon,” but…one novel says that Vader tried to shoot down a shuttle filled with Death Star deserters before he was forced to turn back to the battle. Chief Bast (the guy who tells Tarkin, “We’ve analyzed their attack, sir, and there is a danger”) showed up in the Star Wars Holiday Special, suggesting that he survived. And a video game claims that then Colonel Maximilain Veers escaped on a shuttle moments before the explosion, subsequently crash-landing on Yavin and later rescued. Not getting blown to bits in space? Priceless.

#1: Obi-Wan Kenobi. Why does he get the top spot? He sat around the desert with nothing but Force ghosts to keep him company for nearly two decades, without utterly losing his mind. He got Luke to start discovering his Jedi heritage without spilling the beans about Luke’s family history. He got the Death Star plans off of Tatooine safely, turned himself into a super-effective martyr and completely blew Vader’s mind. Talk about going out in style.

So that’s my list of the top 7 winners for Star Wars! Who else should be on the list? Have your say in the comments!

Previous Post: 22: Winners and Losers of the Star Wars Movies
Next Post: 24: The 7 Losers of Star Wars