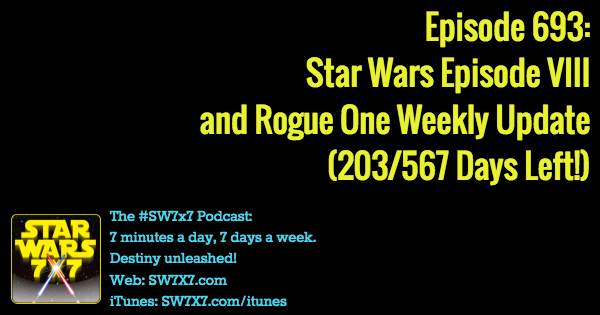 There’s been a major Star Wars Celebration Europe art release that includes a lot of Rogue One: A Star Wars Story representation!

You can see a smaller version on this page, and a super large version here. The Star Wars Show revealed that the name of the black-armored troopers is, in fact, Death Troopers, as had been widely rumored. The poster also reveals a new type of Stormtrooper, the Shoretrooper. (Don’t want to be nitpicky, but on The Star Wars Show, there was a space in “Death Troopers” but no space in “Shoretrooper.” How much should we be reading into that?)

We also got confirmation that the Imperial Walkers we see in the movie are not AT-ATs, as we’d been initially led to believe. Though I seem to think Dave Filoni, Star Wars Rebels showrunner, might have mentioned something about that a while ago, too. That all being said, it’s confirmed that they’re AT-ACTs – All Terrain Armored Cargo Transports.

Meanwhile, on Star Wars Episode VIII, the big news is that they’re done filming in Ireland! Twelve days of filming have come to a close, and now the team packs up for parts unknown.

That's a wrap on the emerald isle. Thanks to all the lovely amazing people here who have made our shoot extraordinary.

Today’s question: Where was the last major battle between the Rebellion and the Empire, which led to the signing of the Galactic Concordance?