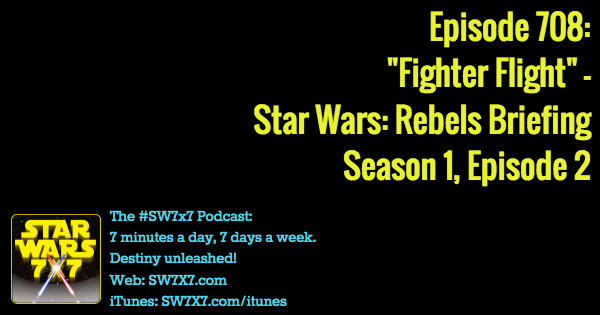 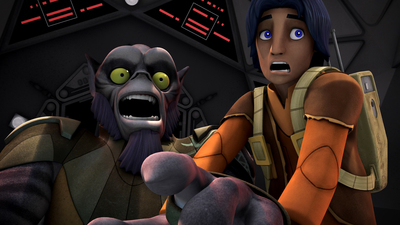 Welcome to the latest Star Wars Rebels Briefing! This time we’re looking at Season 1, Episode 2 – Fighter Flight. Check out the full episode summary on Wookieepedia (from where the image from the show also originates).

In truth, this is a bit of a fluffy episode. It doesn’t advance the overarching story of Rebels any further – it only serves as a means to create a bonding experience between Ezra and Zeb. None of the major villains are involved or introduced, either. Ezra tries a couple of Force moves but is largely unsuccessful except for sensing an imminent crash in their hijacked TIE fighter, which he helps Zeb avoid. 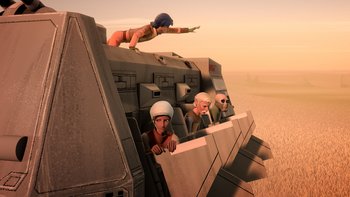 There are a couple of fun extra little things about the episode for long-time Star Wars fans, including the appearance of the Imperial Troop Transport (seen at right, also via Wookieepedia), that was a Sears-exclusive toy back in the day that was just invented as a toy and never appeared in the Original Trilogy. But the Rebels folks decided to make use of it, which is pretty nifty.

There’s also what appears to be another Aladdin callback, with Ezra standing atop a troop transport holding a piece of fruit, with stormtroopers on the ground looking up at him, just like Aladdin having stolen fruit from a stand in Agraba and the soldiers coming after him. Am I crazy, or are you seeing this, too? Have your say in the comments!

Yesterday’s answer: Five (three with a blaster rifle, two with the X-wing cannon)

Today’s question: How does Kylo Ren arrive on Jakku?