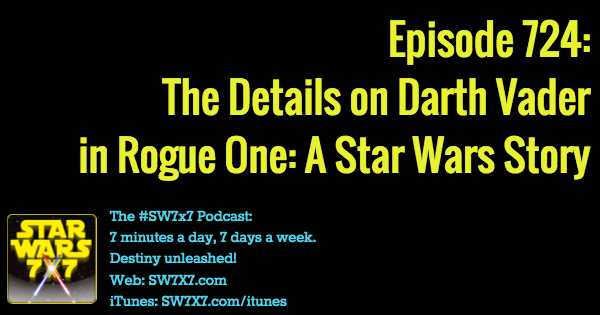 It’s official! The biggest, baddest, deadliest villain in the Star Wars universe returns to the big screen in Rogue One: A Star Wars Story. It’s Darth Vader, and there have been rumors and leaks about his appearance for a while now, but Entertainment Weekly made it official this week with their big cover story exclusive on Rogue One.

They’re not saying much about his appearance, though. Only that he’s used sparingly, and that he appears at a key strategic moment. They also say that a “variety” of actors will fill the suit, which I think means he’ll have some action scenes (remember that stuntman Bob Anderson played Vader in his duels with Luke during Empire and Jedi).

And for the record: I’m betting that Darth Vader gets revealed in the next trailer, that we’re sure to see at Celebration Europe. Specifically, similar to the “Chewie, we’re home” moment in The Force Awakens trailer, I’m betting we get a blackout screen at the end of the trailer, then the sound of Vader’s breathing in the silence, and a fade in to show Vader somewhere and hear James Earl Jones deliver a line that drives everyone insane.

We’ve got more for you in the podcast, so have a listen, and let us know – do you think Vader’s appearance in Rogue One is purely fan service, an utter storytelling necessity, or something in between? Have your say in the comments!

Today’s question: What’s the name of the song that Han, Rey, and Finn hear when they enter Maz Kanata’s castle?