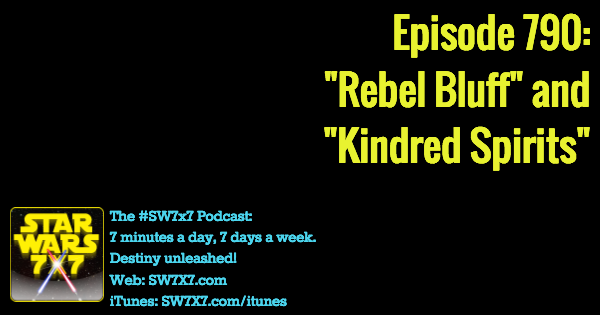 In our last episode for the week on the new short stories in the Star Wars canon, we’re covering “Rebel Bluff” and “Kindred Spirits.”

“Rebel Bluff” first appeared in Star Wars Insider #158, and takes place not long after episode 11 of season 1 of the Star Wars Rebels cartoon series. In it, we find Lando Calrissian sticking his neck out for a lady in distress – at first, just to get back the money she stole from him. But after Lando sees what she does with the money and why, the second time he sticks his neck out for her, it’s for more noble reasons.

As for “Kindred Spirits,” which appeared in issue #159 of Star Wars Insider, that one is a prequel to Dark Disciple, the novel by Christie Golden. The story is also written by Christie Golden (as opposed to yesterday’s “Orientation,” which, though it was a prequel to Paul Kemp’s novel Lords of the Sith, was written by John Jackson Miller). In “Kindred Spirits,” we find Asajj Ventress teaming up with a notorious pirate to reclaim a precious piece of cargo that Ventress had been hired to escort safely, but was stolen by pirates. Ventress’ ship had been shot up and she’d been left for dead in the exchange. In debt to the second band of pirates (who rescued her), Ventress agrees to help the second group of pirates steal the ship and cargo from the first pirates (led by old pal Hondo Ohnaka), as long as Ventress gets to keep the one piece of cargo she’d been hired to guard.

We discuss both stories in depth in the podcast – have a listen, and let us know what you think of these stories in the comments!

Today’s question: Who gets Han and Chewie into the thermal oscillator building on Starkiller Base?