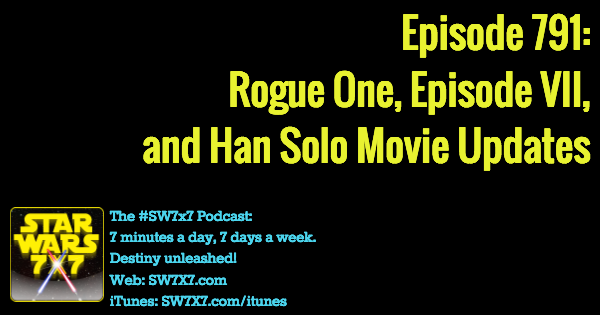 It’s been a couple of weeks since our last update on the movies in production, so I thought, “Hey! Let’s do an update!” It’s easy when it’s your own podcast. 🙂

We’re doing it backwards in this episode, which is to say that the update on the Han Solo movie comes first, with Donald Glover addressing the young Lando rumors. Then, we dive into Episode VIII stuff, addressing Mark Hamill’s cheeky tweet (pun intentional) about shaving his beard and Daisy Ridley theorizing about the release of the title for Episode VIII. Finally, we get into the Rogue One stuff, including the recent Empire Magazine feature. And in the back half of the podcast, we go over the newly announced synopsis for Rogue One: Catalyst, the prequel novel by James Luceno, which reveals a few very important details about character relationships and histories…

Today’s question: Which character claimed to be able to fly anything?