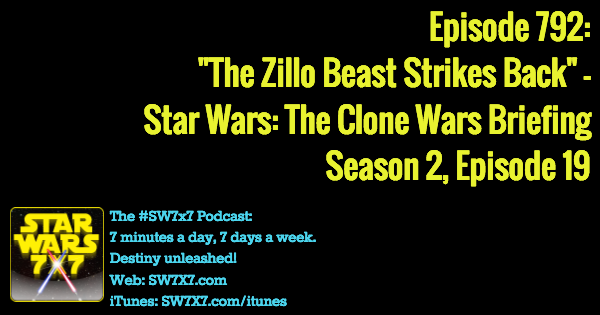 Welcome to another Clone Wars Briefing! This time we’re covering “The Zillo Beast Strikes Back,” episode 19 of season 2 of the Star Wars cartoon series.

In brief: Picking up from where we left off in the last episode, the Zillo Beast has arrived on Coruscant, where Palpatine is pysched to have him. And now that he does, he wants the doctor examining the beast to kill it, so that they may harvest the secrets of its impervious hide. The question of whether the beast is sentient is one of the main quandaries, and despite Palpatine’s suggestion otherwise, the beast sure doesn’t seem to like it when the old boy talks about killing it.

So naturally, they try to kill it, and the beast freaks out about it and breaks loose, rampaging across the city-planet. It sees a video billboard with a message from Palpatine, and makes a beeline for it, smashing it to smithereens. Then, it manages to figure out where Palpatine’s office is, and heads straight for it. Clearly, sentient.

In a “don’t evacuate until you see the neon green of its eye in the window” moment, Palpy, Ani, and Padme wait until the beast is right on top of them before they try to escape in a ship that the beast easily snatches out of midair. Anakin cuts the ship in half so all the people and droids can fall out to safety. Then the clone army gasses the beast to death.

It’s amazing how close all the Jedi can be to Palpy and still not notice he’s a Sith lord. And Rex’s line about how a lot of [Anakin] the general’s plans involve falling was a pretty hysterical one. What were your favorite moments about this one? Share them in the comments!

Today’s question: How many people call Finn “traitor” in The Force Awakens?