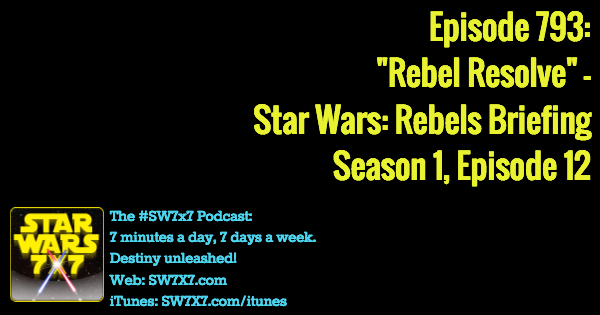 Hey there hi there ho there! It’s time for another Star Wars Rebels Briefing, and this time we’re looking at “Rebel Resolve,” episode 12 of season 1 of Star Wars Rebels.

In the previous episode, Kanan was captured by Governor Tarkin and his gang. Torturing him for information proves fruitless, so Tarkin decides to have Kanan shipped to Mustafar – a place, Hera says that Kanan has told her, where Jedi go to die.

Meanwhile, the Rebel agent Fulcrum advises Hera to lay low, and stop sending attention-getting messages like the one from the previous episode. This “lay low” advice rubs Ezra the wrong way, and he, Sabine, and Zeb go off to meet with the crime lord Vizago. This is their last resort, since hijacking a AT-DP (like a Scout Walker) and trying to break into the Imperial data network to discover Kana’s whereabouts was unsuccessful.

Vizago won’t help at first, and then Ezra spills the beans about him and Kanan being Jedi and all. Vizago tells Ezra about droid couriers being used by the Empire since Tarkin had their own comm tower shot down, but only in exchange for a blank-check “any favor you want” request from Ezra that’s bound to bite him in the rear somewhere down the line.

Hera finally gets wind of this meeting, and after getting passed being angry about the sneaking around behind her back, they hatch their plan – to nab the droid courier, have Chopper pose as the new courier, and get the info on Kanan from a ship in orbit. Which they do and he does, finally jumping out of an airlock and rocketing across space to be picked back up on the fly by the Ghost.

Soon after Chopper boots the Imperial droid courier off the ship and into a tens-of-thousands-of-meters fall (which it survives intact, somehow), they find out where Kanan is headed, and that’s where we leave off with a “To Be Continued” message before the lead up to the season finale.

I felt like this continued the promise of what I’d suggested in the previous episode, that the series had taken a turn for the serious. And I don’t meant that they weren’t serious about it previously, or that the show itself wasn’t serious. I mean the seriousness of the fact that they’re telling a very important story in the history of the Rebellion, and they seem to have cottoned to that notion, and are starting to run with it. What did YOU think of it? Share your thoughts in the comments!

Today’s question: Who are the two people who call Finn a traitor?