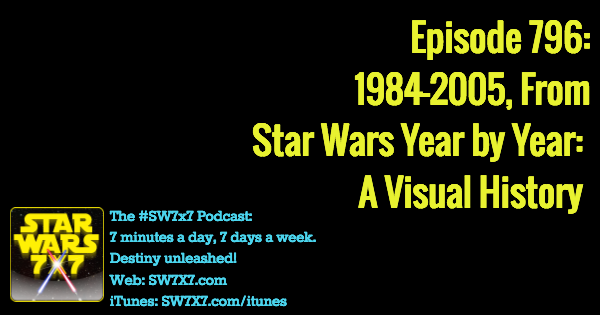 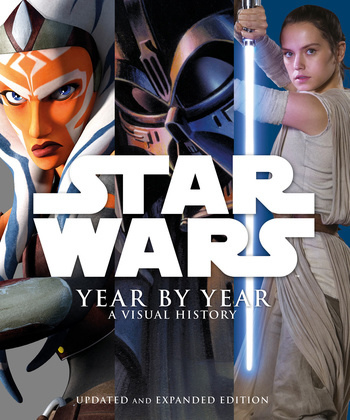 It’s part two of our three-part look at Star Wars Year by Year: A Visual History (Updated and Expanded Edition), the coffee-table tome by DK Publishing that charts the history of the Star Wars franchise alongside the events of world history, and where possible, looks at how the two intermingle.

Today, we’re looking at the middle third of the book, covering the “Between the Trilogies” time period (1984-1996) and “The Prequel Trilogy” (1997-2005). For what we jokingly refer to as “the Dark Times,” the period between OT and PT really was rife with new Star Wars material. Two Ewok movies, two cartoon series (Droids and Ewoks), a bunch of video games, museum exhibits, Star Tours, the West End Games roleplaying guides that filled in so much of the backstory of the Star Wars galaxy, and the comics published by Marvel and run in newspaper syndication.

And that was all before Heir to the Empire came out in 1991!

Of course, the “Expanded Universe” existed before Zahn’s novel debuted, but that really lit the spark for what we commonly think of as the EU (now “Legends”). Star Wars Year by Year covers all of this, and gives the same level of detailed treatment to the Prequel Trilogy as it does to the Original Trilogy. (If not more so!) They even cover the original Clone Wars cartoon series by Genndy Tartakovsky, three-minute episodes that appeared between Attack of the Clones and Revenge of the Sith, and tie unused concept art from Attack of the Clones to the creation of one of the most memorable characters in the galaxy, Asajj Ventress.

Again, thank you to DK Publishing for gifting me with a copy of the book to review and share with listeners of the podcast. There’s a goldmine of information and surprises in Star Wars Year by Year, and we’ll cover the last two time periods in tomorrow’s podcast.

Today’s question: How many Original Trilogy characters appear in The Force Awakens?