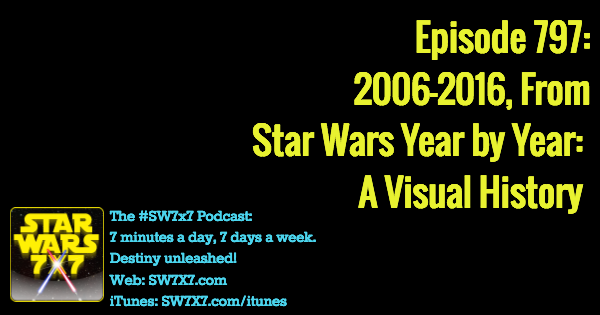 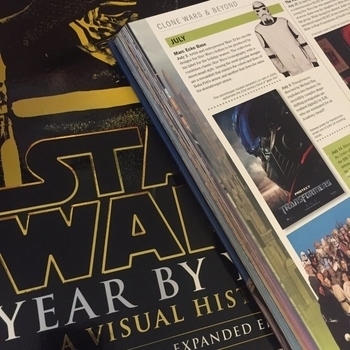 In our last day of coverage on Star Wars Year by Year: A Visual History (Updated and Expanded Edition), we’re looking at the “Clone Wars and Beyond” period (206-2012) and the “Star Wars: A New Era Begins” period (2013-2016). Both sections are written by Pablo Hidalgo, who manages to work in a reference to his beloved Transformers franchise in the process (pictured).

The Clone Wars movie and series get significant coverage here, as does Star Wars Rebels. The Force Awakens also got its due, but I felt like it was more about the business of the transition to Disney and the mile markers of the reveals we’d received during the production, rather than giving us the kinds of details about the genesis of the movie and development tidbits that we got in the Original Trilogy and Prequel Trilogy sections. I know there’s an Art of The Force Awakens book out there that would have more of what I was hoping for, but maybe there’s some level of story they’re not ready to tell just yet – maybe not until the Sequel Trilogy is complete.

It’s a minor quibble of mine, though, in comparison to the awe and wonderment at the material overall. And there’s a bit about Rogue One at the end, which says that the movie is about the “first victory of the Rebel Alliance.” We’ve talked about this on the podcast before – the idea that there could be rebels without an “Alliance,” per se, and that it was one of those head-smackingly hidden-in-plain-sight concepts. All of these different rebel cells, like the Lothal one from Star Wars Rebels, had been operating more or less independently. Sure, they had interactions with other rebels (as the Lothal cell did with Bail Organa and his people), but they never really came together as multiple groups to do anything.

With the return of Saw Gerrera and the info about him being seen as “extreme” by other rebel leaders, you get the idea that the group being stitched together to steal the Death Star plans is really an alliance of rebel cells. Just how many? That remains to be seen. But if Cassian Andor says he’s been recruiting for the rebellion for a long time, you can bet it’s more than just Saw’s group.

Today’s question: Can you name the eight Original Trilogy characters who physically appear in The Force Awakens?