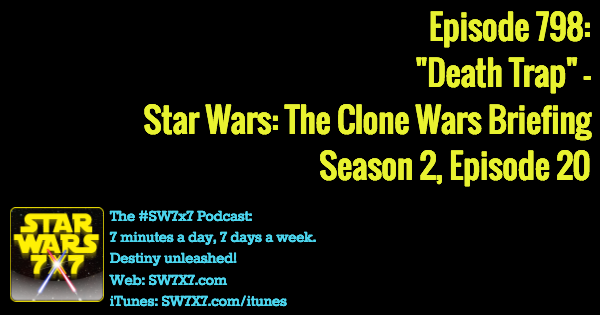 Welcome to a Clone Wars Briefing! We’re looking at “Death Trap,” episode 20 of season 2 of the Clone Wars series. (Here’s the full episode rundown on Wookieepedia, from where the episode image hails, too.)

This episode had what I thought was a brilliant premise – the young Boba Fett would be indistinguishable from clones at his maturation level, so he manages to infiltrate a Clone Youth Brigade which is headed for a tour of a Jedi Cruiser – one that has a particular passenger on board.

Mace Windu, as you’ll recall from Attack of the Clones, killed Boba’s dad, Jango. Boba’s out for revenge, and almost gets it. He booby traps Mace’s quarters, but it’s a clone trooper who winds up triggering the bomb and getting killed instead of Mace. Boba’s accomplice instructs him to blow the reactors on the ship, now that everyone knows there’s a saboteur on board. Boba only wants to kill Mace, though, and not hurt anyone else, but is goaded into doing the deed.

With the ship doomed to crash on a nearby planet, everyone evacuates (except a ridiculous admiral), but Boba sabotages his escape pod so it shoots well past the rendezvous point. There, he’s picked up by Slave I and his accomplices (plural) – Aurra Sing and Bossk. (In case you need the reminders – Bossk being the ugly Trandoshan bounty hunter from The Empire Strikes Back, and Aurra being the bald-except-for-a-top-knot, white-skinned, red-bodysuited bounty hunter seen overlooking the podrace in a split-second shot from The Phantom Menace).

Aurra tells Boba to either leave the young clones to their doom or suffer their fate, and Boba at least apologizes while doing the wrong thing. That said, Clone Wars has been pretty ruthless in its killing of clones, but apparently drew the line at the Youth Brigade, because they’re found safe by Anakin and Mace shortly after Boba takes off with Aurra and Bossk.

I only wish I hadn’t seen the episode summary in advance, because I wouldn’t have known it was Boba until he actually identified himself. For the first third of the episode or so, he just looked like any other clone, albeit an evil one. I would’ve thought that the makers of the Clone Wars might be pursuing the idea of what happens when a clone doesn’t develop properly, but nope – it was a bad-boy-Boba story after all.

What do you think of the episode? Share your thoughts in the comments!

Today’s question: How many Prequel Trilogy characters physically appear in The Force Awakens?