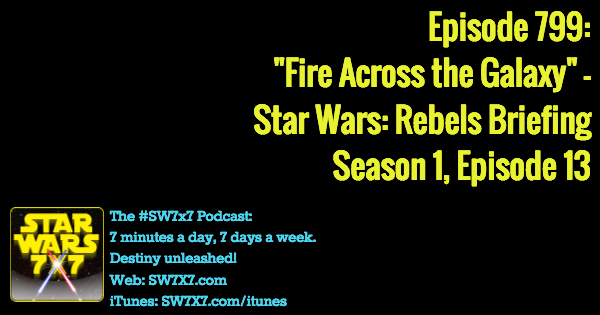 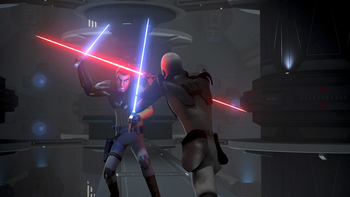 Welcome to the last Star Wars Rebels Briefing of Season 1! This time, we’re looking at “Fire Across the Galaxy,” episode 13 and the season finale. (Here’s the full episode rundown on Wookieepedia, from where the action shot comes.)

The big reveals? There are multiple rebel cells operating in the galaxy at this time (4-5 years prior to A New Hope), some of which know about each other; the secret agent “Fulcrum” is actually Ahsoka Tano; and Darth Vader is going to crash the party on Lothal.

Now then: According to Star Wars Year by Year: A Visual History (which we were talking about earlier this week), we’re going to see the Rebel Alliance’s “first victory” in Rogue One: A Star Wars Story. So even though members of multiple rebel cells came to help the Lothal rebels escape the jam they’d put themselves into, I guess that doesn’t yet count as an official “Alliance.” But still.

Second, the Ahsoka reveal had been floating around as a rumor in the weeks leading up to the finale back in 2015, so perhaps it wasn’t too much of a surprise. But it does raise a lot of questions, including: How did she survive Order 66? What’s she been doing in the 15 years since? And how did she hook up with the rebels?

We’ll supposedly get the answer to the Order 66 question, and the first part of what she’s been doing with her time, in the new Ahsoka novel that’s coming out next month. As for the rest? I guess we’ll have to wait and see for Season 2.

As for Darth Vader, he’s dropped in at the very last minute of the episode, introduced as an “alternative solution” to the conflict on Lothal. We only get heavy breathing from him, no dialogue – they know how to keep us strung along, don’t they? – but we know that his arrival can’t mean anything good for anyone on Lothal.

This episode also resolves the three-episode arc that began with Kanan getting captured by the Empire, imprisoned on a Star Destroyer, and sent to Mustafar (the place where Jedi go to die, supposedly). The Ghost crew rescues him, and he has his final showdown with the Grand Inquisitor. Defeated, with the power cores of the Star Destroyer on fire and the hyperdrive overloading, the Grand Inquisitor tells Kanan there are worse fates than death, and then lets go of the catwalk from which he’d been hanging, falling to his doom.

Ezra and Kanan help each other escape, the Imperials evacuate the Star Destroyer, and the rebels win again. For now.

What did YOU think about the season finale? Share your thoughts in the comments!

Today’s question: Can you name the four Prequel Trilogy characters who physically appear in The Force Awakens?