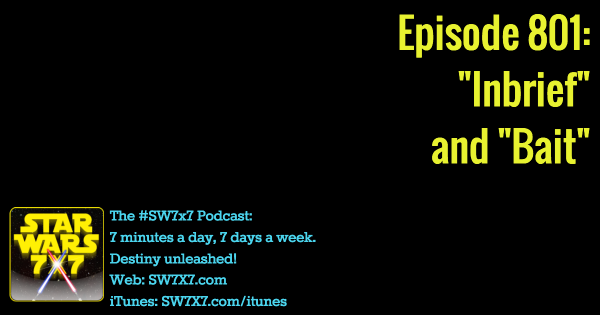 “Inbrief” gives you the backstory on Brand, one of the more mysterious characters from the novel Star Wars: Battlefront: Twilight Company. Set before the events of that novel, Twilight Company has just defeated another Imperial outpost when Brand turns her blaster on Captain Evon. Evon has a bounty on his head from the Empire, and though Brand seems like she’s about to collect, she hesitates long enough for Evon to reveal that he knows her real name and her backstory.

We find out that her parents and their farmworkers were killed by armed thugs to whom they wouldn’t pay protection money. Brand grew up and eventually took on bounties form the Empire to root out that criminal enterprise. Then, she wanted to get off-world, and took the Empire up on pursuing a bounty for Evon.

Problem is, in the time she’d been posing as a member of Twilight Company in order to get close enough to Evon, she started taking care of the fresh meat in the company, making sure they didn’t get killed. That fit right in the with the definition of “family” taught by her parents. Brand doesn’t have any family left, and Evon offers her the chance to join Twilight Company for real and become a part of the family. After giving it careful consideration, she agrees, but only because the bounty on Evon’s head isn’t high enough, she claims. But we know the truth, don’t we?

Meanwhile, in “Bait,” the giant Grummgar from The Force Awakens is illegally hunting a creature on Ithor to get its pelt for a collector client. Grummy comes upon a girl in the forest who looks to be easy prey for the creature, but she was waiting for the thing all along, and kills it herself. Grummy, in grudging admiration, goes to talk to her, but she’s naturally suspicious, and they end up trading threats and talking about sharing the kill.

But it turns out another of the monsters has been stalking them, and Grummy shoots it, so now they each have one! And then it goes all “Gift of the Magi,” with the girl offering to skin Grummy’s so he doesn’t mess up the pelt, and Grummy offering to gut hers since it’s pretty heavy and looks like too much for her to handle. Never mind that she seemed to be handling things just fine before Grummy came along. This one wasn’t one of my favorites.

How about you? What did YOU think of these two stories? Share your thoughts in the comments!

Today’s question: Whose voices do we hear during Rey’s “forceback” visions in The Force Awakens?