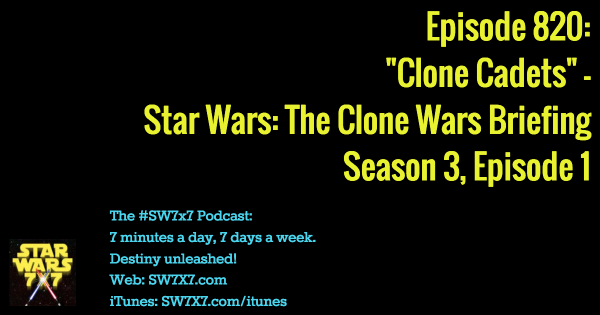 It’s time for another Clone Wars Briefing! We’re kicking off season 3 with “Clone Cadets,” which is actually a prequel to a season 1 episode called “Rookies.” (Here’s the full “Clone Cadets” episode rundown from Wookieepedia, from where the pic hails from as well.)

Shockingly, there aren’t any “big names” in this first episode – no Anakin, no Ahsoka, no Obi-Wan. Shaak Ti is the biggest Jedi name, and the two bounty hunters, well, you’ve likely never heard of them. (Lord knows I hadn’t. Bric and El-Les. You see?)

But we do get some familiar clones – Echo, Fives, Droidbait, Cutup, and Hevy. The story revolves around them not gelling as a squad, and they could flunk out of cadet school and have to work as janitors. Which brings us into some pretty heavy territory! The janitor in their barracks, 99, is a malformed clone, and we find out that after the death of Jango Fett, the Kaminoans have had to “stretch” Jango’s DNA to keep up the clone production at the rate the Republic wants. This is resulting in more “defective” clones than normal, which the Kaminoans think should be disposed of like so much trash. Shaak Ti, as you’d imagine, respects the clones as sentient beings, regardless of the so-called defects. You could pop this kind of conversation into real-world life and it would sound very much the same.

The Clone Wars folks give you their take by showing Domino Squad come together and create an unorthodox solution to a training program simulation that, when successful, earns them the right to graduate from the training program, and get onto the battlefield.

What did you think of the episode? Was that a good way to start a new season? Share your thoughts in the comments!

Today’s question: What does Finn say will happen to him and Poe if they go back to Jakku?

Previous Post: BONUS EPISODE: Inside a #RogueFriday Midnight Event
Next Post: Episode 821: A Tribute to Vin Scully, and 67 Years of Podcast Inspiration