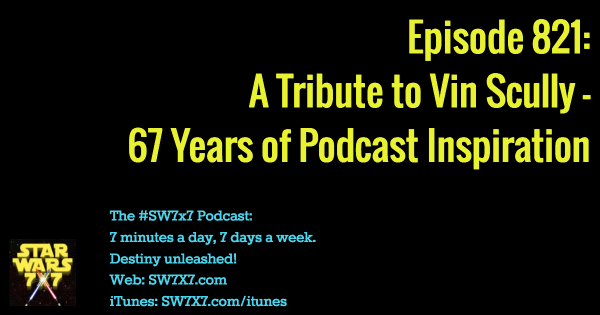 The man you see here is Vin Scully, who’s won just about every sports broadcasting award you can imagine. He’s been elected into Halls of Fame decades ago, and continued going strong for 67 years. 67 YEARS!

Today, Vin Scully is retiring. It’s his final broadcast as the play-by-play announcer for the Los Angeles Dodgers. Even that sells him short, because most times when you listen to a baseball game, you get two or three people talking to each other about the game, instead of one guy talking to you. Vin has been the one guy for so long, it defies the imagination.

The creatives making new Star Wars stories like to talk about how its best to look outside of Star Wars as they search for inspiration in telling new and compelling tales. When I was getting ready to start podcasting, I looked outside Star Wars for examples of how to broadcast. And Vin Scully was at the top of my list. I’ve listened to him since I was a kid, and so have multiple generations before and after me. No one weaves a story like he does, and he’ll be forever linked with momentous baseball events – Don Larsen’s World Series perfect game, a bunch of no-hitters and perfect games by Sandy Koufax, Hank Aaron’s record-breaking home run, and Kirk Gibson’s 1988 World Series Game 1 home run, just to name a few.

But even the everyday broadcast from Scully was beautiful. One night, with a ton of players sporting beards, he decided to regale listeners about the history of beards. Not too long ago this season, he told the story of how the Beatles got stuck inside Dodger Stadium after a concert, which included a damaged Lincoln Continental, an armored car with flat tires, and an ambulance that dropped a radiator. All while calling the play by play. By himself.

At Star Wars Celebration Europe this year, I met Steele Saunders of the Steele Wars Podcast, and he told me (paraphrasing) that I had a very smooth voice on my podcast, a very calming voice. And that was about the highest compliment he could have given me, because it meant that maybe I had learned something from Vin that I’d wanted to learn and convey.

As a kid, Vin would crawl under the radio (yes, he’s 88 years old, so back in his day, radios were like furniture), and thrill to the crowd noise from football games washing over him. He still thrills to it to this day, literally 80 years to the day that he first became a baseball fan, and the final day of his professional broadcasting career. That’s the reason why, at Star Wars Celebration Anaheim, I recorded the audio of the Celebration Stage room while the new Force Awakens trailer played. Listen to today’s podcast – toward the end, you’ll here that audio clip from it. You’ll hear Harrison Ford say “Chewie…” and then there will be a little bit of silence, and then you’ll hear what happens when Han and Chewie show up on screen. It’s so loud, you can’t hear the “we’re home,” and you can barely hear the music fanfare at the end of it.

If that crowd roar washes over you and transports you to a pace of utter joy, then I’m thrilled and honored to have captured it for you, and you have Vin to thank for the idea. He’s a man who knows when to speak, and when to let the world unfold before you. And even though he’s riding off into the sunset, he’ll still be an inspiration to me as I move forward with the podcast, and continue to enjoy the delight in Star Wars and share it with you.