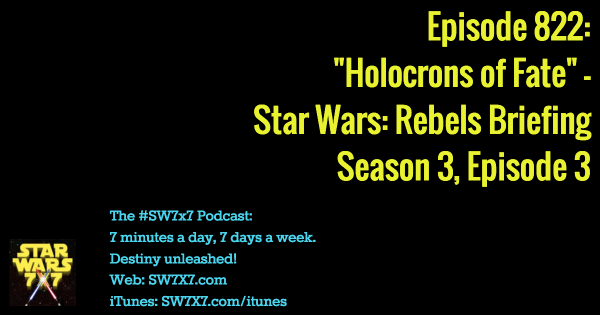 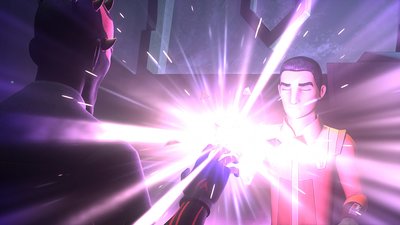 Welcome back for another Star Wars Rebels Briefing! Today I’m looking at “Holocrons of Fate,” episode 3 of the new season. This episode features a number of scenes we saw in the season 3 trailer, and fills them out for us. (Here’s the full episode rundown on Wookieepedia, from where the image comes, too.)

In brief: Maul takes Zeb, Hera, Sabine, and Chopper hostage, and demands both the Sith and Jedi Holocron from Kanan and Ezra in exchange. Of course, it’s a double-cross, but in the meantime, Ezra and Maul combine the Jedi and Sith Holocrons and see a vision – Ezra sees planets and places, “some familiar, some not,” and “twin suns.” Maul, after seeing “oblivion,” stumbles away raving, “He lives!” (Possibly referring to Obi-Wan Kenobi, is the prevailing theory.)

Here are some fun facts from the episode and from the Rebels Recon installment attached to it (embedded below):

This season of Rebels takes place upwards of six months after the season two finale, and we’ll be dealing with the fallout from the confrontation with Maul for a while.

Taylor Gray (the voice of Ezra) says we’ll see him grow so much throughout season 3.

Dave Filoni adds that that’s in opposition to the Anakin story – his family was the Jedi, who lacked compassion, and were so selfless that they essentially forgot to care for him.

Pablo Hidalgo says that Maul has a game plan, stuff he can’t let go of, secrets buried in strategic places, will start unburying as he works toward his ultimate end goal.

Filoni says that Maul is trying to be his own thing, and many people have tried that, and it hasn’t worked out so well.

We learn in this episode that Maul can extract memories from people’s minds, much like Kylo Ren does in The Force Awakens.

Bendu refers to the Sith Holocron as the “keeper of the shadow law,” and says that a vergence of a Jedi and a Sith Holocron poses grave danger – it will create a “clarity of vision beyond any of your kind.” Any secret or destiny could be known. Bendu has seen this happen before, and the implication is that it’s a bad thing. “Once a secret is known, it cannot be unknown,” he says ominously.

Maul is still part droid. (That was news to me, but I’m not caught up on everything!)

Bendu notes that there’s an “imbalance” between Kanan and Ezra, which of course is due to the events of the season 2 finale. Bendu thinks that the exercise of retrieving the Sith Holocron will help. “Maybe Master and Apprentice can find balance again.”

By combining the Jedi and Sith Holocrons, Maul is seeking “hope.” What his idea of hope is, we have no idea. Ezra is still looking for the way to defeat the Sith. And I didn’t bury the lede, so to speak – what they saw is described above.

Check out “Rebels Recon” below for more behind-the-scenes info!

Today’s question: What is it about Finn that gets BB-8 so worked up when BB-8 sees Finn for the first time?