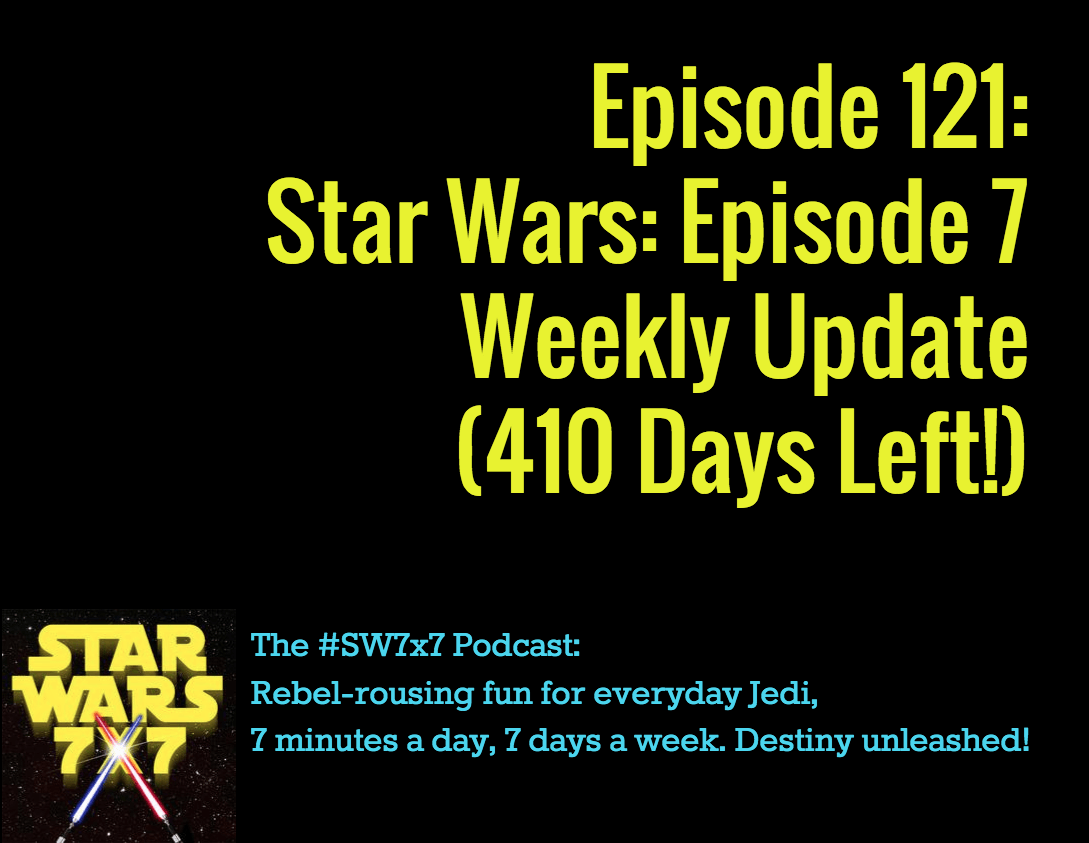 The biggest news event, per se, wasn’t a Star Wars related news event, and was notable not for what it contained, but what it didn’t contain. Strange, right? Roll with me for a moment.

The slate of films for Phase Three of the Marvel Cinematic Universe was unveiled this week, along with release dates for all the films planned from now through May of 2019. Noticeably, all the release months are May, July, and November, with the exceptions of no November 2015, and no July 2016.

What does this mean for us, as Star Wars fans? Well, considering that Star Wars: Episode VII is coming out in December 2015, and it makes sense that Disney wouldn’t want its two big franchises to be squaring off against each other at the box office, it seems safe to say that we’re going to be getting a huge gift each holiday season from 2015 onward.

December releases have been perfectly fine for all the Lord of the Rings and Hobbit movies, so why not Star Wars? Granted, Star Wars has been filed under the traditional summer blockbuster release, but the more I think about it, the more I think this is a really smart move. I have to admit, I’d been a little bothered by the break in tradition in moving to a December release, but it makes much more sense to put Star Wars there than a Marvel movie.

Like the Tolkien movies, I don’t think Star Wars is release date dependent anymore. It’s going to get its audience no matter where they release it. And if the Tolkien movies are any indication, epics seem to do well in that time of the year. Well-done epics, certainly. And I think people will go to see it again and again at that time of year, not just because it’s Star Wars, but also because there’s not much else like it to see that time of year. Yes, it’s Oscar season, so a lot of good movies come out at that time of year, but nothing like Star Wars. It won’t have to compete against all the other franchise and wannabe franchise schlock out there.

In other news about things that aren’t there, Mark Hamill posted a picture of himself on Twitter with no beard. Which strongly suggests that his part in the filming of Episode VII is also done. We are in the winding down phase, after all. And if Luke is in Episode VIII, he’s probably not going to have the grow the beard back until mid-2016…might have been a good idea for him to keep it through the Movember facial hair movement, though!

Meanwhile, here’s something a bit more tangible, news-wise. Rumor has it via the John Williams Fan Network that Williams has received a trailer for Star Wars: Episode VII, and will be getting to work on scoring it starting November 15th. The Making Star Wars folks suspect that this will be for a teaser trailer only, and that it won’t include anything from the film itself.

Personally, I have no idea how long it takes to score a trailer if you’re starting from scratch with the music, but if it’s just a teaser, maybe John’s just going to take bits and pieces from his existing music for it. I’m sure he has ideas for the new music already, too…point is, though, maybe we’ll be getting a special gift for the holidays this year.

And finally, Star Wars Underworld posted a leaked image of what the new villain in Episode VII looks like, class-picture style with backdrop and everything. That kind of stuff makes me suspicious, personally, but stories from both Making Star Wars and Indie Revolver claim that it’s legit. Of note is the unique design of the lightsaber, which you can check out here. Indie Revolver says this character with this lightsaber design have filmed in the Forest of Dean, while Making Star Wars says that the actual design of both lightsaber and costume in the movie may vary slightly from the leaked image.

And that’s all the Episode 7 news fit to podcast this week! 410 days left…

I’m finishing Star Wars: Tarkin right now, and there’s a throwaway line in the book about him being uncomfortable in the boots he’s wearing at a certain point. I have to wonder if that was informed by the fact that Peter Cushing was wearing slippers while filming close-ups in Star Wars, since his costume boots hurt his feet. If that was intentional, then well played, James Luceno, well played.

Today’s question: To what did Luke attribute his tauntaun’s strange behavior?