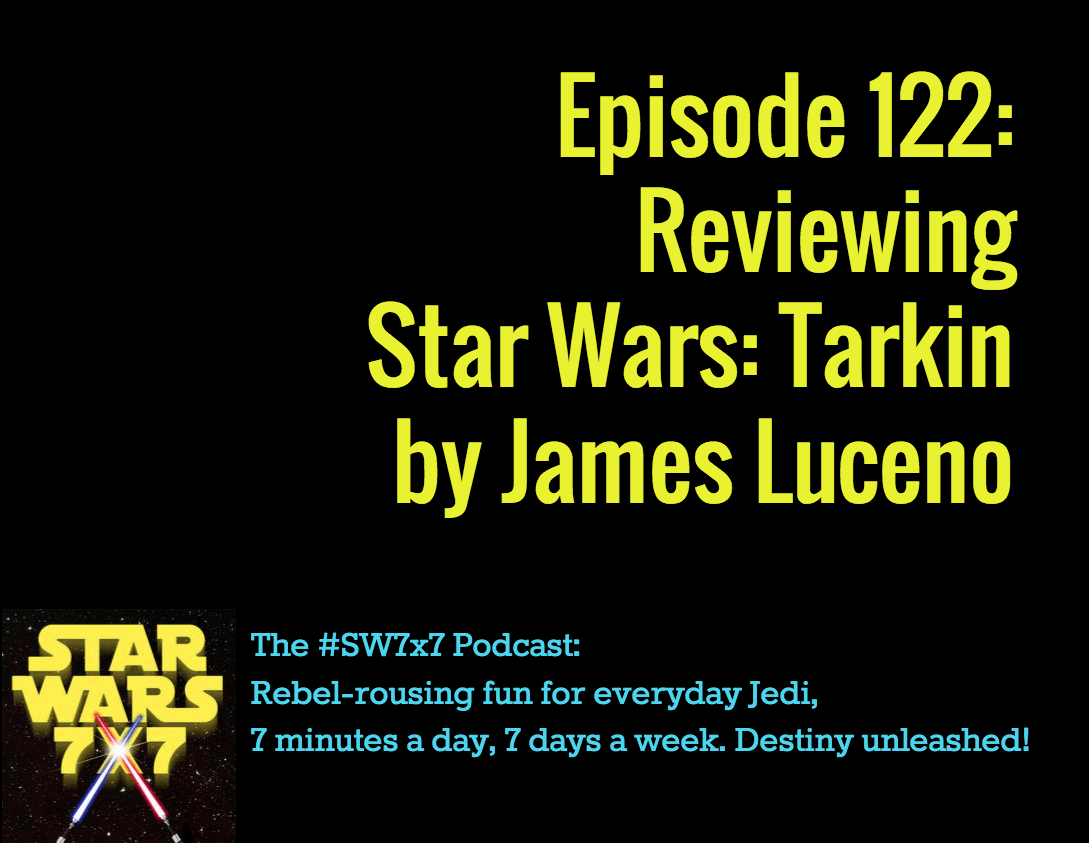 Whereas Star Wars: A New Dawn was kind of an intimate book, introducing us to Kanan and Hera from Star Wars Rebels, Star Wars: Tarkin is a sprawling book, a planet-hopping, action-packed, perspective-shifting novel that packs an incredible amount of Star Wars goodness into its 258 pages.

Now, I know that there’s been Expanded Universe/Legends stuff put out there about Tarkin, but I haven’t read any of it, so I can’t give you the comparative of what’s changed…and I have to say, I’d be interested in checking that out, because what we have here with Tarkin is the first bit of revisionist history, if you will, that we’re seeing in the Star Wars universe.

The story takes place five years after Revenge of the Sith, and primary driver of the action is an attack on the station where Tarkin is currently assigned, overseeing part of the construction of the first Death Star. A ragtag group of – well, not exactly rebels, per se, but people with a specific grudge against the Empire – knows they can’t take down the Empire by themselves, but sets out to do as much damage as they can with the time and resources they have and can steal.

Against the backdrop of Tarkin’s attempts to track down and capture or kill the saboteurs, author James Luceno paints a compelling picture of the development of the Empire since the destruction of the Jedi. From the strained relationship between Military Intelligence and the Imperial Security Bureau, to the shift from clone troopers to newly enlisted personnel, we see a galaxy that all too easily fell into the grip of evil forces – forces looking to tighten their hold not just by force, but the fear of force as well.

The Emperor teams Tarkin and Darth Vader together in the pursuit of the saboteurs, and though Vader’s true identity is a mystery to Tarkin, he has his suspicions. As for Vader, he was not a fan of Tarkin’s when he was still Anakin Skywalker and Tarkin was the lead prosecutor in the trial of Anakin’s padawan Ahsoka Tano in Star Wars: The Clone Wars. The Emperor’s very curious to see how they get on together…

I mentioned the shifting perspectives, and as far as that goes, in addition to the main story, we also get to spend time with the Emperor himself, as well as the saboteurs looking to make a dent in the Empire’s plans. Most compelling of all, perhaps, are the trips back in time we take, to explore Tarkin’s formative summers on the Carrion Plateau of his home planet; his success in the Outland Regions Security Force; his grooming for political leadership by Sheev Palpatine; his loyalty in the face of Count Dooku’s attempts at recruiting him into the Separatists; and his military prowess under the Emperor’s new regime.

Once of the amazing feats Luceno pulls off is that you find yourself rooting for Tarkin and Vader in their attempt to track down the group. And while you wouldn’t call it a friendship, exactly, there’s something rather wonderful about how the relationship between Vader and Tarkin develops over the course of the novel. Vader is an enigma to be feared from the start, but over the course of the novel, and as they demonstrate their intelligence and expertise to each other in the field, you can feel them beginning to gain respect for each other. And it finally gels as a story hinted at early on in the novel is revealed in a very satisfying way.

Filled with drama, menace, and action, Star Wars: Tarkin paints a compelling portrait of the man who rose to the highest level of power possible in the Empire, serving as architect, enforcer, and visionary for the Sith lords now in command of the galaxy. It was a fast and fun read, and I’ll be sharing more with you about it in the coming days!

So Palpatine’s first name was finally revealed in Star Wars: Tarkin, coming out on Tuesday, but they bypassed the opportunity to give Count Dooku a first name. Seems like a missed opportunity, right?

Yesterday’s answer: It smelled something

Today’s question: Who was the last Rebel to board the Falcon during the evacuation of Hoth?