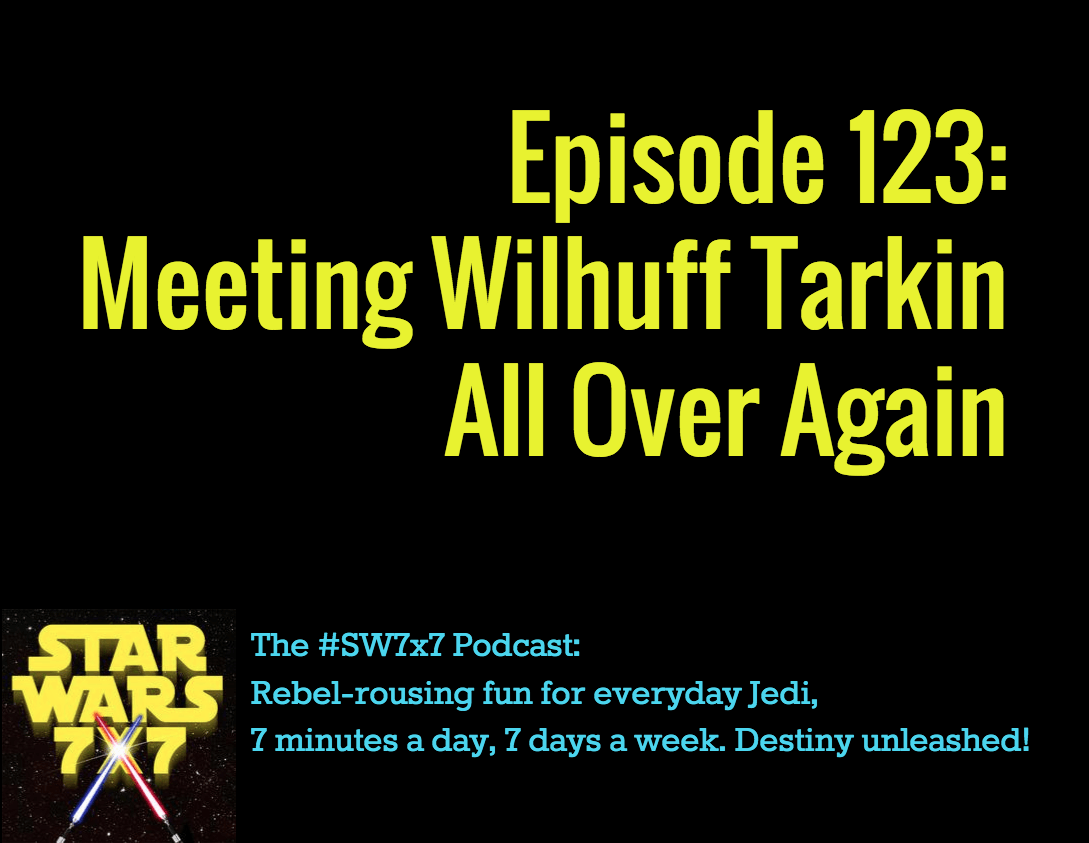 In Star Wars: Tarkin, we get to spend time with three familiar faces – Tarkin himself, of course, as well as Vader, and Palpatine. For the next couple of days, we’re going to take each of them in turn, and dive a little deeper into their characters. Today, since Tarkin is the subject of the book, I thought we’d kick it off with him.

Now, Tarkin does have a back story established in the Expanded Universe, and everyone writing for the new canon is supposed to be starting from scratch, to some degree. Writers and creators have also been given license to pick and choose elements from the galaxy of Legends material to incorporate in the new canon. Essentially, whether it’s brand-new material or information being integrated from EU material, it all has to be vetted and approved by the story group inside Lucasfilm, which I think is a fantastic thing. On the one hand, writers and creators are unbound by the past, and yet somewhat free to pick and choose from previous stories as needed, which may make the creative process a little easier. It might offer some shortcuts.

As far as Tarkin goes, there are familiar elements to his backstory. He’s still part of a wealthy and powerful family, still joins the Outland Regions Security Force, still gets to know Palpatine in his political years. This is stuff we get in the flashbacks spread throughout the book, helping us rediscover the man behind the do-whatever-it-takes-to-win reputation. We got to know him a little better in The Clone Wars cartoon series, and in the new novel, we go deeper than ever before into Tarkin’s mind.

This has to be the most challenging part of the job for Luceno, I’d imagine, and possibly the most rewarding, too. Luceno has spent detailed time in this corner of the Star Wars universe, having penned the now-Legends books Dark Lord: The Rise of Darth Vader and his last Star Wars book prior to Tarkin, the Darth Plagueis novel in 2012. To be able to reinvent Tarkin for the existing set of fans, and hopefully introduce him to a new generation of Star Wars readers, is both a tall order and a pretty sweet deal.

The biggest addition to the Tarkin lore has to be the stories about how he spent his summers as a pre-teen and teenager. From a very young age, his father had been drumming into him how the Tarkins had fought for dominance on their homeworld, and how it could be taken away from them at any moment. Tarkin finds out, one night, that there’s a literal component to these harangues.

One night at dinner, he’s warned that people will be coming for him, to take him away into the Eriadu wilderness, where he’ll learn what it takes to survive in the most visceral sense. Soon enough, the night comes where, before young Wilhuff gets to have the first bite of his dinner, his uncle Jova and a couple more mud-and-dirt-caked men show up to spirit Tarkin away. He surprises everyone by producing a pack of supplies and an expedition vest he’d made himself in secret, working ever since the announcement that he’d be taken away.

As alien as the experience is to the privileged and previously sheltered Tarkin, he takes the steps necessary to survive with the small band roving through the brutal Eriadu wilderness. The lessons his father had been lecturing at the dinner table take on a new dimension for him, and his uncle’s lessons are the very same – just applied in a very practical, survival-of-the-fittest sense.

For me, this was one of the most compelling parts of the book. It brings Tarkin’s mindset and methods into sharp relief as he chases down the saboteurs who attacked Sentinel Base, and continue to sow chaos across multiple star systems. Once you’ve read it, I’d love to know what you think about his rebooted backstory – chime in at Facebook.com/sw7x7!

Surprising or little known Star Wars tidbits, sometimes related to today’s Force Feature.
Incredible blast from the past! Art Carney’s no longer with us, but the man most people know as Ed Norton from The Honeymooners was also Saun Dann from the infamous Star Wars Holiday Special. Speaking of which, Life Day is just around the corner! How do you plan to celebrate? Let your fellow listeners know at Facebook.com/sw7x7!

Today’s question: What beast of burden was tied up outside the entrance to the Mos Eisley cantina?