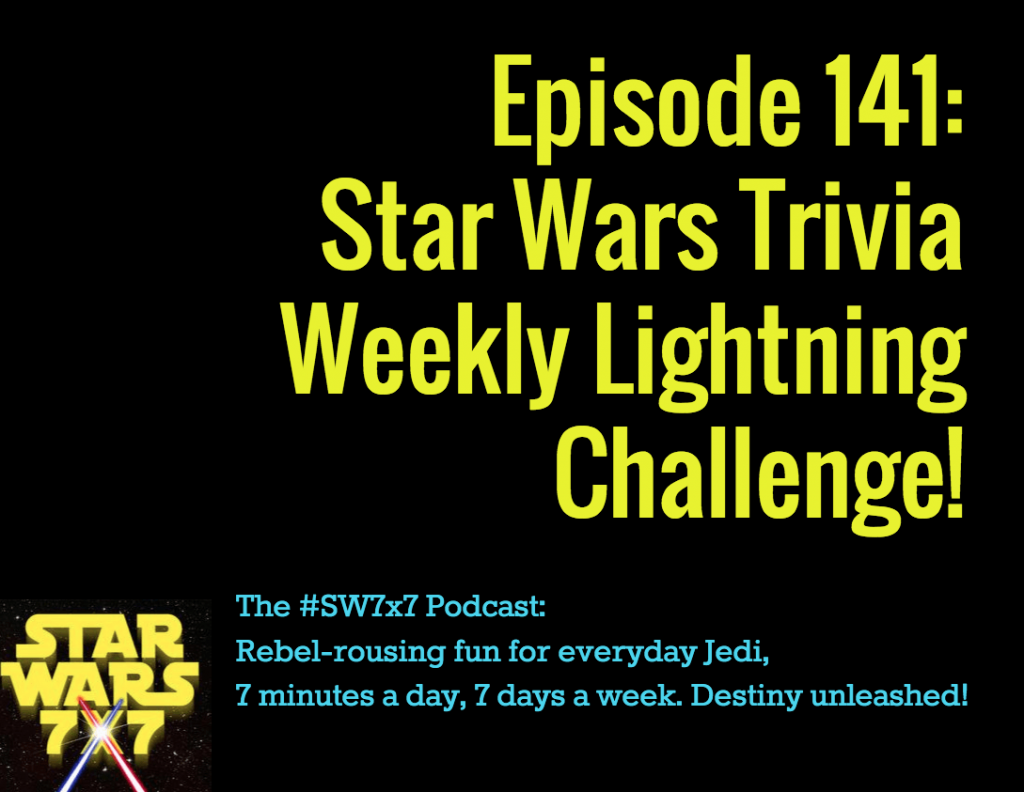 It’s time! I got 30 out of 34 correct this week in the Star Wars trivia lightning challenge – let’s see how you do! Listen to the podcast, or if you support the show via Patreon, you can see the video version of the show, which includes behind the scenes footage of Quizmaster Joe and Scorekeeper Declan acting up for the camera!

Not a Patron? Go here – just $1 a month gets you access to the feed, and gives me a cup of tea four times a year as thanks for producing this podcast.

1. What type of farmer was Uncle Owen?

2. What object did Uncle Owen forbid Obi-Wan Kenobi from giving to Luke?

3. Who died at the same time as Luke’s father, according to Uncle Owen?

4. What did Uncle Owen tell Luke to take to the garage for clean up?

5. What actor played Uncle Owen in the Original Trilogy?

6. Who said, “Who’s the more foolish, the fool or the fool who follows him”?

7. What prevents atmosphere in a hangar bay from escaping into space?

8. What did the Falcon‘s crew do after leaving Tatooine, according to Han’s falsified logs?

9. What planet did the Death Star orbit to get a clear shot at the Rebel base?

10. Who locked in the auxiliary power when the Falcon was caught by the Death Star’s tractor beam?

11. How many seats grace the Falcon‘s cockpit?

12. Who confirmed that Han had survived the carbon-freezing process?

13. What ailment do individuals frozen in carbonite often suffer upon their freedom?

14. Who was Chewbacca told to protect before Han was frozen in carbonite?

15. What planet did Boba Fett fly to with Han’s carbonite block?

17. Who did Darth Vader promise to compensate if Han died during carbon-freezing?

18. Who said, “If this is a consular ship, where is the ambassador?”

20. What was Darth Vader looking for when he attacked Princess Leia’s consular ship?

21. Where was C-3PO afraid he and R2-D2 would be sent, after stormtroopers boarded Leia’s consular ship?

23. What actor wore the Darth Vader costume during filming?

24. Who was in charge of the Endor strike team?

25. How many blaster bolts did an Imperial scout trooper fire at Princess Leia and Wicket?

27. Who gave the order, “Take the squad ahead,” before leaving to search for Leia on Endor?

28. What weapon did Wicket carry?

30. What Rebel leader to Han Solo, “A death mark’s not an easy thing to live with”?

31. What was Han Solo afraid he would never see again, prior to the mission to Endor?

32. Who was Han planning to pay off once he left the Rebel base on Hoth?

33. What planet, according to Han, doesn’t have enough life forms to fill a space cruiser?

34. What did Han think the probe droid might be, when first detected by Rebel sensors?