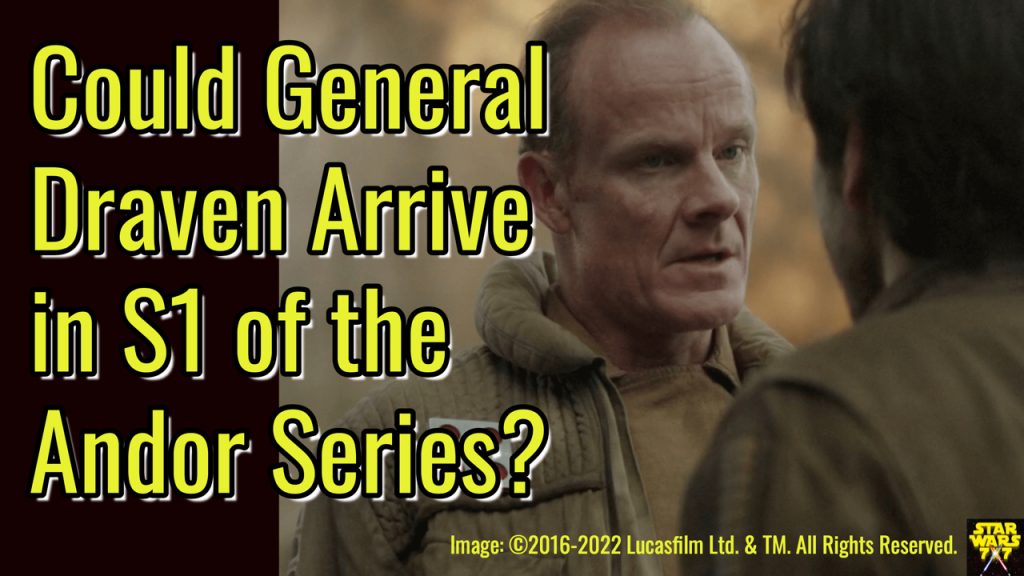 We’re *almost* done with our deep dive in the Rogue One Ultimate Visual Guide, and we’ve saved some of the meatiest stuff for last: Character bios and backstories for Cassian Andor, Saw Gerrera, and (!) General Draven. Punch it!

And thank you again for your support as I try to encourage Mark Hamill to join me for a conversation about his career! We’re coming down to the 3,00th episode wire, but we’ll keep trying even if we get past 3k and it hasn’t happened yet.

I'm collecting in one spot all the proposed questions (there will seven in all, natch) for that oft-mentioned dream interview with @MarkHamill – in posted order, but I'd probably ask them chronologically…

Star Wars 7×7 episode 2989. We’re going to just about finish our Rogue One Ultimate Visual Guide deep dive, looking at things that may reflect on the Andor series and what we might expect to see during that incredible twelve episode event. Today we’re looking at character profiles and three in specific, one of them, of course, being Cassian Andor’s character profile. Also, we’re going to look at Saw Gerrera and surprisingly perhaps, General Draven. Punch it!

Hey, Rebel Rouser. I’m Allen Voivod and this is Star Wars Seven x Seven, your daily dose of Star Wars joy, and thank you so much for joining me for it. So I wasn’t necessarily expecting to talk about General Draven, but there’s an interesting little thing in the Rogue One Ultimate Visual Guide where it says that Cassian Andor was recruited into the Rebel Alliance by General Davits Draven. He’s the guy in Rogue One who told Cassian forget what you heard in there, kill Galen Erso on sight. So that was a little bit odd considering that we see Luthen Rael recruiting Cassian, obviously, but it doesn’t necessarily mean that it’s a rewriting of canon or anything like that.

In fact, both things can be true. It could be that Luthen is recruiting Cassian Andor for whatever his activities are, but that’s happening about three years before the formation of the Rebel Alliance. And so when that happens, then Draven has Cassian come in and join that whole situation. So it remains to be seen how Luthen’s story plays out and how his association with Cassian plays out, but both things can be true.

It also suggests that we are going to see Draven sometime in the Andor series, more likely to be season two than season one, but season one not outside the realm of possibility. It also says in the visual guide that he was trained as a field operative by General Airen Cracken. And I was just listening to stuff about Airen Cracken in the audiobook adaptation of The Krytos Trap, the new unabridged version for the Essential Legends collection, which we will talk about at some point. We’ve just had so much Andor stuff to talk about. But here’s what it says about Draven’s background that may relate to the time period that we see at the start of the Andor series. So it talks about how Draven worked in the Republic’s military intelligence unit during the Clone Wars, and then of course, it eventually became the Galactic Empire, and he was working with strategists and field commanders and other high ranking officers who would go on to form the core of the Imperial military.

“This experience fuels Draven’s authoritative views on Imperial psychology. He knows the men and women who built the military, as well as the lengths they will go to ensure the Empire’s dominance.” It goes on to say when he joined the Rebellion, it was “with an urgent drive to stop the Empire before it came too powerful and he now feels the Rebels have squandered one too many opportunities to strike” at the time of Rogue One. So that means that if we do see him in the Andor series, he’s going to be someone raising the alarm about the Empire and we’re going to see pushback from other people. And the last thing I’ll share is that it says that Draven “has earned Mon Mothma’s respect, though at times she finds him difficult,” which I thought was a funny little anecdote to add. And it also says that he has “little doubt of the Empire’s cruelty.” And so yeah, factor that into what we’re going to see in Andor as well.

Then we move on to the stuff with Saw Gerrera and it talks about how he has just “lost so much in this fight, that fighting is all he knows and has left.” And it says for 20 years, for nearly 20 years, Saw “has been following tenuous clues that, unbeknownst to him, point to the Death Star operation in pursuit to prove the true nature of the Empire. Saw revealed how far he is willing to go targeting civilians and employing ghastly interrogation techniques. Such acts have strained his relationship with the Rebel Alliance to the extent that he has been formally censured and ousted as an ally.” And lastly, it says that as Saw has “become increasingly battle damaged and unstable, his paranoia has grown. He believes agents of both the Empire and the Rebellion are vying to assassinate him for his past crimes. This paranoia is the latest evolution of his conviction that the Empire is creating something monstrous.”

So the question now for us is just how far down the rabbit hole of paranoia is Saw Gerrera at this time? And it looks like he’s a good amount of the way there when we see him, just in that brief moment in the Andor trailer when everybody’s pointing rifles and blasters at Luthen Rael as he comes in. Right. And Luthen doesn’t exactly look dangerous. Right. He doesn’t look like he’s much of a threat necessarily, but everybody’s guns are up.

So yeah, it seems like he might already be well down that path. And then we come to Cassian Andor himself. So here’s some backstory about Cassian Andor from the Rogue One Ultimate Visual Guide. According to this, now in his mid 20s, so at the time of Rogue One, “Andor grew up in the wilds of the Outer Rim and came of age fighting against the Republic during the tumultuous Clone Wars. His father was killed at the Carida Military Academy during a protest against the expansion of Republic militarism.” And that directly bears on the events of the Andor series. In specific, that scene that was initially shown during the Rogue One rerelease in IMAX, that is now actually on Disney Plus. If you want to check out the whole thing on Disney Plus day, that’s when they put it out yesterday. And it’s the part where Luthen Rael is talking to Cassian and says, oh yeah, like your father was hung in the town square. Which then Cassian pulls a blaster on Luthen at that point and it gets a little bit tense, I guess you could say. Then the bio goes on to say that “though he wasn’t a formal Separatist, he became part of a Confederacy-backed insurrectionist cell at a young age, throwing rocks and bottles at Republic walkers and clone soldiers.”

And it says “he came to learn firsthand that even the most advanced combat machinery could be crippled with the right grit sprinkled in the right gears. In the time of the Empire, Andor was drawn into anarchist movements that continued to defy Imperial edicts. He was recruited by General Draven into the growing rebellion.” And reading that immediately made me think of the longer trailer for Andor, where we see what is likely a young Cassian sneaking into some sort of Imperial facility. Bound to be doing some kind of sabotage work, you would imagine, and would be doing it with some very primitive means at his disposal. So not only has he been in this fight since he was six years old, he’s been using very clever ways to go about that fight, it seems as well.

One of the other clever things that has happened for him over the years is what Pablo Hidalgo refers to as “escapology” in the Rogue One Ultimate Visual Guide. Just his years of law bending, as Pablo puts it, have honed his skills in Escapology. So if he is trapped somewhere, chances are he’s going to be able to find a way to get out. Though, as we noted in our Rogue One rewatch of the actual movie, he said it was a first for him to be locked in a prison cell when he was locked up in Saw Gerrera’s compound. Now, whether that’s true, of course, is certainly a point that’s worth debate and discussion, but take it on its face and say, yeah, let’s just assume he’s being honest and that’s his first time. Well, in a prison cell, sure. But that doesn’t mean that he hasn’t necessarily been trapped in other places where he’s had to use some kind of particular lock breaking, code breaking, slicing skills in order to get out of a tight situation.

And then there’s another bit that talks about basically the kind of man that we are going to see and or evolve into, and the series is going to show us this process bit by bit. It’s a section called The Hard Calls, and it says “the fledgling Rebel Alliance relies heavily on covert operatives to stymie Imperial operations. These strikes of discrete and targeted acts of sabotage, espionage, and even assassinations fill Andor’s case file.”

Then it goes on to say that “he knows from experience the efficacy of Imperial interrogation, and so he respects the need to keep secrets from field agents.” Whoa. So that means probably that he himself has been under Imperial interrogation, and might we see that in the Andor series as well? And it also says he remains active to stave off the downtime that would plunge him into deeper reflection on some of his most extreme assignments. What active means is probably, give me another mission, give me another mission. Give me another mission, I would imagine, and not just like, oh, I’m going to be playing pickleball in my downtime, or something ridiculous like that.

And the last thing I’ll flag for you is how it says that he has spent “most of his career in Alliance intelligence working for the Operations department, a dangerous posting that puts agents directly in contact with the empire. Statistics place the odds of an agent surviving 20 field missions at 23%.” But as we know from Cassian himself, if you’re going to get into the Empire’s house, just walk in there like you belong. He has a lot of experience with this, so he’s definitely somebody who’s going to defy the odds.

And that’s what I’ve got for you today for our Rogue One Ultimate Visual Guide deep dive. We’re just about done with that, though. There’s something that’s going to inform our conversation next week, and we’ll get to that, of course, next week, but for now, that is going to do it for this episode of the show, and it just remains for me to say thank you so much for joining me for it, as always, and may the Force be with you wherever in the world you may be.