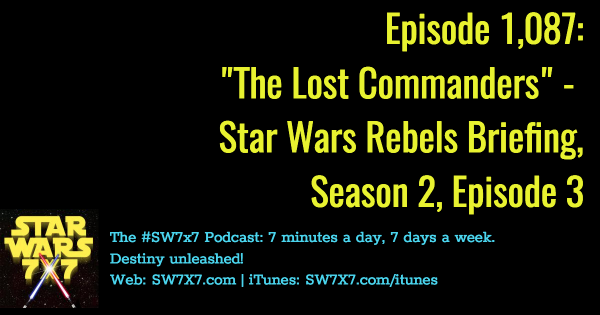 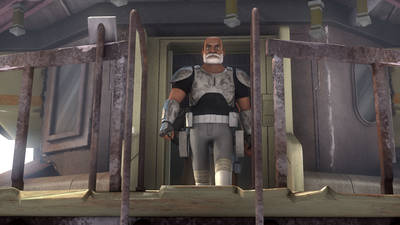 Welcome to another Star Wars Rebels Briefing! This time, I’m looking at “The Lost Commanders,” episode 3 from season 2 of the Star Wars TV series. This is another milestone episode, as it brings back three clone troopers from the Clone Wars TV series: Gregor, Wolffe, and the ever-popular Captain Rex. (Here’s the full episode rundown on Wookieepedia, from where the image also comes.)

This was a big reveal when it first released back in 2016 – the fact that Captain Rex survived the Clone Wars, and is now hanging out with Wolffe and Gregor in the middle of nowhere. Kanan is less than pleased to see clones, but Rex and Ezra manage to lead the peace between the Ghost crew and the clones.

Commander Wolffe, however, messes it all up. Fearing what would happen to him, Rex, and Gregor if they were caught helping Jedi, Wolffe sends a message out to the Empire, which is received by Agent Kallus. He orders a probe droid sent out, and of course the probe finds them. The probe is also able to manipulate the control board of the old retro-fitted AT-TE walker, and ends up shooting the Phantom shuttle when it’s discovered and tries to escape.

Not only does everyone discover Wolffe’s betrayal after they manage to shoot down the probe droid, but we also find out that he’s been keeping Rex from receiving the messages Ahsoka’s been sending to them. Again, presumably, to protect the other clones by not interacting with the Jedi.

So, we’re left with a cliffhanger: The Ghost having hyperdrive issues in orbit, the Phantom unable to fly on the surface, and the Empire aware of their presence on Seelos. We’ll cover the second half of the story, “Relics of the Old Republic,” on next week’s Rebels briefing.

Today’s question: Why does the informant keep trying to leave?