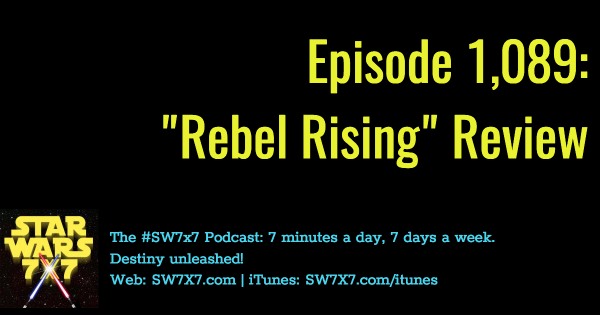 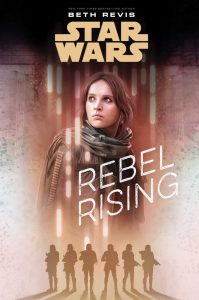 This is not the review I expected to write. Knowing that Rebel Rising, the novel by Beth Revis, is pitched more toward young adult readers, I was expecting something a little more upbeat in its tone. Sure, Jyn Erso’s had a hard life – mom killed, dad kidnapped, raised by a paranoid freedom fighter willing to kill innocents in order to get his points across – but I figured there would be less heartbreak, less betrayal, and more hope.

In fact, it’s quite the opposite. Look, it’s not as bleak as, say, Requiem for a Dream, and the slings and arrows suffered by Jyn aren’t at all of the types suffered by the Requiem characters in their hyper-realistic novel/movie. But it’s that “trapped” feeling that got to me – how the main Requiem characters are stuck in their increasingly horrific situations, and the choices they make keep them sinking further into the abyss. By the end, you truly believe there’s nothing they can do to get out, there’s no hope left, and as bad as things are, they’re only going to get worse until death comes to release them.

That’s the feeling I got by reading Rebel Rising. Which makes it a good novel, if a difficult one, emotionally speaking. In fact, it’s good especially it has the ability to create that kind of visceral reaction. The story fills the gap in our knowledge of Jyn’s life almost entirely, but certainly definitively. This is all the biography you’ll need, including Saw picking her up from the hatch hideout on Lah’mu, and what happened next; a horrific incident that likely created or reinforced Saw’s reputation for extremism that pushed him away from the Alliance; Saw’s abandonment of Jyn when she was 16, blaster and knives accounted for; and the incident that got Jyn sentenced to Wobani.

Thankfully, Revis rewards us and Jyn at the end for keeping an ember of hope alive, despite the terrors she’s faced. I haven’t re-watched Rogue One since completing Rebel Rising, but I anticipate respecting Jyn as a character even more as a result of the read. By the time we see her in Rogue One, she has become the living embodiment of that sharp stick Saw loved to talk about. Even though she’s been beaten down and corrupted, she can still take the day.

Yesterday’s answer: He was afraid they were going to leave without him