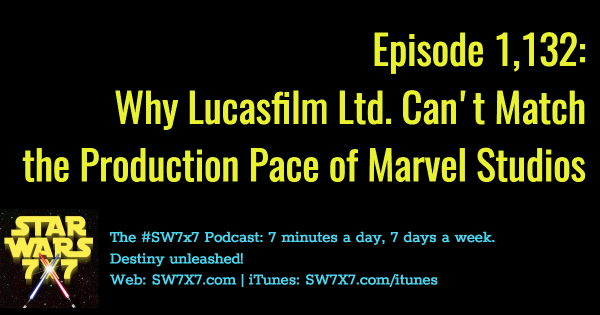 It may seem like Lucasfilm has been having a challenge with directors recently – needing Tony Gilroy to come in and tinker with Gareth Edwards’ Rogue One, needing Ron Howard to take over the Han Solo movie – but there may be a more fundamental issue plaguing Lucasfilm and the smooth production of its movies, and the cause goes all the way back to the days when George Lucas was running the company.

The issue seems to be that there aren’t enough producers running around at Lucasfilm. According to a Slate write-up:

[A producer] shepherds the production from start to finish. In a typical arrangement, the producer develops an idea or script with a writer and secures the necessary rights. [The producer] often hires the director, supervises casting, and assembles a crew. Additionally, the producer oversees the budget and then coordinates the postproduction work—everything from editing, to commissioning music, to encouraging the film’s stars to plug the movie on talk shows.

Bad Robot was a hired gun for The Force Awakens – they aren’t becoming Lucasfilm producers. Ram Bergman is a frequent collaborator with Rian Johnson, which explains his presence on The Last Jedi. They’re a package deal, not a Lucasfilm hire.

The Rogue One producers? Also outside talent. At least we’re starting to see a bit of continuity with Allison Shearmur, a producer on Rogue One, back at it for the Han Solo movie. And she produced the final three Hunger Games movies, so she knows her way around a blockbuster.

Kathleen Kennedy is one of the finest producers of our time, and in no way – NO WAY AT ALL! – am I saying or implying anything negative about her and performance. However, she’s the President of Lucasfilm now, which is a huge company that also includes ILM, Skywalker Sound, and other subsidiaries. She doesn’t have the time to attend to the movies the way she might if she were only leading a production company. She’s got a lot more on her plate now, and logically, she simply can’t be as involved as a producer as she was when she was at a producer at Amblin Entertainment (which she co-founded with Steven Spielberg then-future-husband Frank Marshall), and later at the Kennedy/Marshall Company (co-founded with husband Frank Marshall).

She, and Lucasfilm, need to develop a team of producers that they can trust if they want to ramp up their movie production.

Of course, that begs two questions: Do they really want to do that? And, should they?

Today’s question: What specific scenario is Jyn worried about, if K-2SO accompanies her and Cassian to Jedha City?