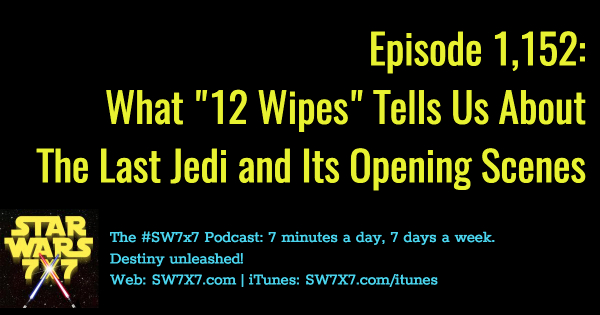 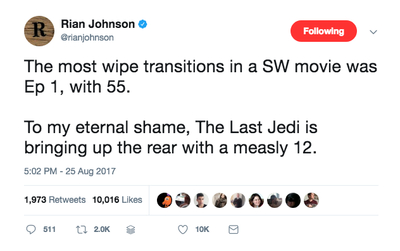 A wipe is a type of film transition where one shot replaces another by traveling from one side of the frame to another or with a special shape.

It’s rather old school, and Lucas used them a bunch. Rian Johnson recently posted a Twitter poll asking people which Star Wars movie had the most wipe transitions: Empire Strikes Back, A New Hope, or The Force Awakens. This was by way of leading to the announcement that, to Rian’s “eternal shame,” The Last Jedi will only have 12 wipe transitions – two less, even, than The Force Awakens. (FYI, in the poll, Empire had more than Hope, 42 to 31.)

This, as it turns out, is rather an interesting hint about The Last Jedi and how it’s structured. It means that, like in J.J. Abrams’ The Force Awakens, we’re going to have long sequences that stick in one location and have multiple scenes in that location. Think about how it’s 9:32 into TFA before the first wipe, or how long we spend on Takodana without a wipe. And all the things that happen in those spaces of time…

We also know that every single Star Wars movie (including Rogue One) starts with a scene in space:

When you think of The Last Jedi in the context of the above, it suggests strongly that a scene with Luke and Rey will NOT be the first thing we see in TLJ. In fact, it may be the second or the third. What I’m sure will come before it is an extended action sequence featuring the evacuation of the Resistance base on D’Qar, and the new First Order Dreadnought trying to reduce it to rubble. The thing that *could* also come before it, and even before the evacuation sequence, is the arrival of Kylo Ren into the waiting arms of Supreme Leader Snoke.

I’m sharing more of the rationale about this in today’s podcast, and I’d love to hear your thoughts on the matter, too!