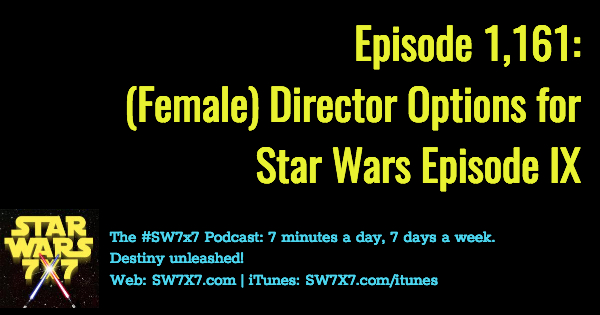 This is the perfect opportunity for Lucasfilm to take the step that needs to be taken, and bring a female director in to take the helm of Episode IX.

This isn’t about doing it for the sake of doing it.

The fact of the matter is, there are lots of female directors out there who are more than capable of handling the task. Defaulting to men doing it all the time is just getting boring.

Yes, Rian Johnson and J.J. Abrams are the rumored frontrunners, and yes, there’s are good reasons why for each of them. And as an aside, the fact that Rian Johnson is being talked about to take over Episode IX should give you that much more confidence that he’s done well with The Last Jedi.

But Lucasfilm is making a concerted effort to bring more diversity to the actors appearing onscreen. It’s time they did the same for the personnel offscreen.

UPDATE: J.J. Abrams was chosen, and rather quickly, for Episode IX. As I said before, there are a good reasons for selecting him. He’s a safe choice, to be sure, and I suppose that if there’s any movie with which they’d want to play it safe, it’s this one. But it feels like a terribly missed opportunity.

Maybe if they’d hired a woman to direct it, and it didn’t come out well, the negative reaction would have been too much for them to handle. It would, in certain circles, be blamed on a female director for the sole reason of her gender.

But I feel like this is a missed opportunity. And with Stephen Daldry allegedly in talks to direct an alleged Obi-Wan Kenobi movie, it doesn’t look like this is going to happen nearly as soon as I wish it would.