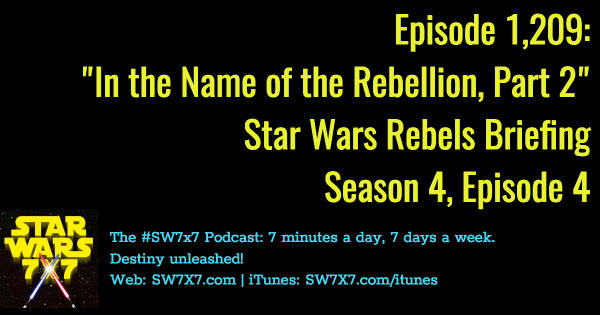 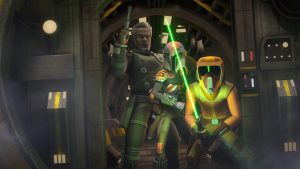 The second half of “In the Name of the Rebellion” proves to be even more action-packed than the first half, as Ezra and Sabine become willing pawns in Saw Gerrera’s latest operation. (Here’s the full rundown on the two-part story on Wookieepedia, from where the image also originates.)

This is Episode 4 of Season 4 of Star Wars Rebels, and though it could be the only set of episodes in which we see Saw this season, I hope it’s not. I’d love to be able to see a bridge between the vital and out-in-front Saw from Rebels and the ailing, reclusive-but-still-fighting Saw of Rogue One.

Be that as it may, this episode name-checks Jedha as the source of some precious cargo on an Imperial transport disguised as an ordinary cargo ship. It’s a full spoiler podcast, and it’s also setting up tomorrow’s podcast because of a semi-stinger comment at the end of the episode made by Ezra. Just think – a couple deleted scenes in two Star Wars movies, and the franchise could be radically different…