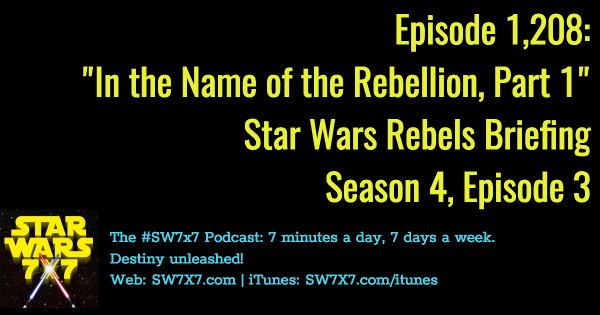 Saw Gerrera returns to Star Wars Rebels! And though it’s an explosive return (pun intended), it’s not yet as wild as it could be. (Here’s the link to the full episode rundown on Wookieepedia, which includes the rundown for the second half of the episode as well.)

What do I mean by that? Well, there was a case to be made that we were going to see what drove the Rebels under Mon Mothma away from Saw Gerrera and his Partisans. We may just get it via dialogue and narrative instead, based on the events of Part 1 of this two-part series.

On the podcast today, I’m recapping the details of the episode, and capturing a key exchange between Mon Mothma and Saw Gerrera that illustrates just how wide the divide has gotten – as well as where you’ll likely have to go to get the scoop on the things Saw has done to alienate himself.