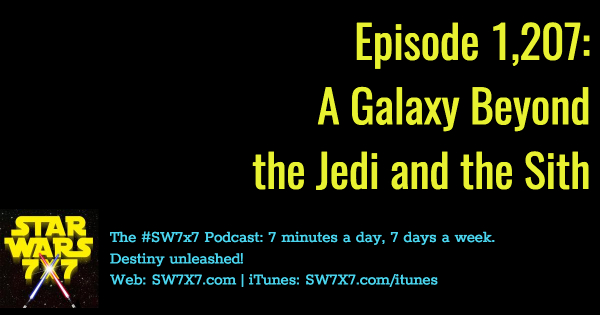 When Luke says “It’s time for the Jedi to end” in the first trailer for The Last Jedi, you didn’t actually believe him, did you?

Maybe you thought he was speaking from the pain of memory. Maybe the destruction of his academy has caused him to become bitter, or scared, or otherwise resistant to the idea of reviving the Jedi in the galaxy.

And then you probably thought that the movie would be an exercise in turning Luke around, so he sees the error of his ways and gets back to work with a new generation of Jedi.

But what if the opposite is true? What if Lucasfilm is, in fact, preparing us for a galaxy without the Jedi?

There’s evidence out there to support the theory, and that’s what I’ll be digging into on today’s podcast. I’d love to hear your thoughts about it, too, so please share in the comments!

And here’s the link to the interview with Ken Liu (author of the upcoming The Legends of Luke Skywalker) via Entertainment Weekly, which I referenced on the podcast as well. 🙂