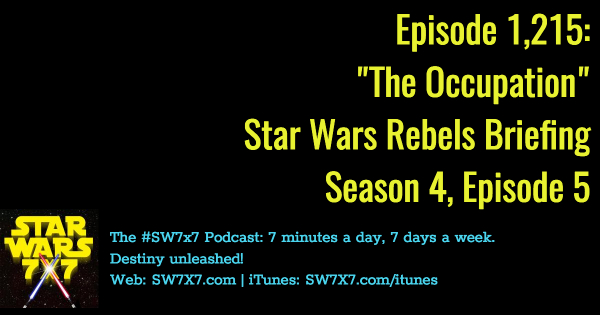 Welcome to “The Occupation”! It’s episode 5 from season 4 of Star Wars Rebels, and features a premise we knew was coming: The return of the Ghost crew to Lothal. (Here’s the link to the full episode rundown on Wookieepedia for you.)

It’s the first of a two-part story, though curiously, it doesn’t get the “Part 1” and “Part 2” treatment the way “Heroes of Mandalore” and “In the Name of the Rebellion” did. In brief – since this is, in fact, a briefing – the Yavin IV rebels have picked up a message from Ezra’s old friend Ryder on Lothal. There’s been a new development with the TIE Defender – yup, the one you remember from the 1990s computer game. Unfortunately, the transmission was cut off at the source.

What’s happening there? There’s only one way to find out, but Mon Mothma says that even if the Ghost crew can get past the total lockdown of the planet, there’s no way she can promise an extraction.

To which Ezra says, “I’m there to stay.”

It seemed for a moment like Sabine’s story path could have led her to leave the Ghost crew during the Mandalore episodes, but of course that didn’t happen. Now it sounds like the same thing could happen to Ezra, but it seems that’s even less likely, all things considered.

I haven’t seen the second half of the story, “Flight of the Defender,” just yet, thanks to the wind/rain storm that’s knocked out power for about a million people in New England. I’m racing battery power to make sure this gets out to you! I’ll still cover “Flight of the Defender” in Wednesday’s podcast for you. Personally, I can’t wait to see how it turns out…