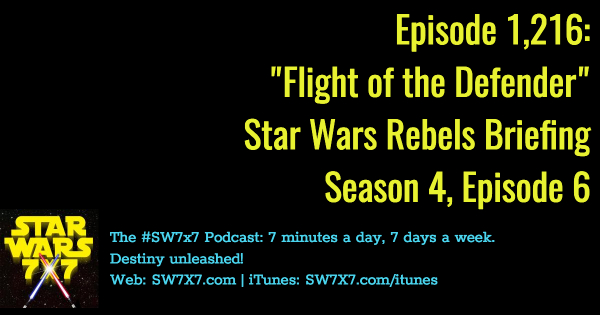 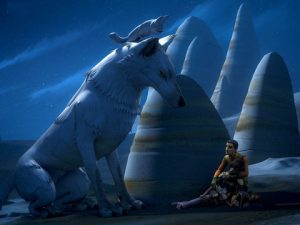 “Flight of the Defender” is not “The Occupation Part 2” – it’s the second episode in what’s going to be a multi-episode arc about Lothal, the Empire’s destruction of it, the advancement of the TIE Defender program with the debut of the “Elite” prototype, and even a bit of Force mysticism, too. (Here’s the full episode rundown on Wookieepedia, from where the image also hails.)

We pick up the day after the Ghost crew finally connected with Ryder, and they’re spying on an Imperial base where there’s supposed to be a test of the new ship. This isn’t the factory where they’re making them, just an airbase in the middle of comparative nowhere.

The rebels get a recording of the flyby, but Sabine and Ezra decide they can do better. They decide to infiltrate the base to retrieve the flight data recorder, which will have everything the Rebellion needs to know about the ship. Of course, they’re discovered, and Grand Admiral Thrawn arrives in time to watch Sabine and Ezra lay waste to the airbase and make good their escape.

Of course, the thing has a kill switch, but our heroes manage to escape, and are taken to safety overnight by a Loth-wolf, a creature that hasn’t been seen, allegedly, in a hundred years. It has the power to speak in a limited fashion, and cast spells of a sort. When it breathes on Sabine and says, “Sleep,” she does immediately. And after the ride is over and Ezra asks the wolf why it helped them, the wolf says, “Dume.” Which is Kanan Jarrus’ real last name, by the way. So that just brought things to a whole new level of intriguing.

They’re going to be on Lothal for at least two, and possibly a third, upcoming episodes, so when Ezra said he was “there to say,” maybe he was more serious than we all expected…