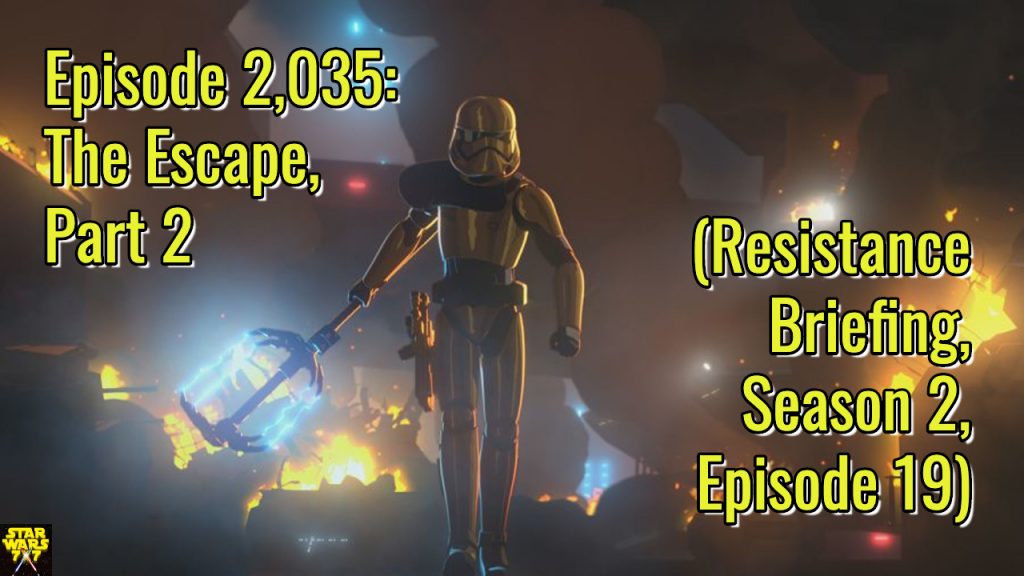 The 20+ minutes that make up part two of “The Escape” are also the final moments from the series run of Star Wars Resistance. When we broke for the first half, the Colossus was waiting in the Barabesh system, hoping to get word from Kaz or Yeager about their mission to help Tam defect from the First Order. Torra was ready to lead the other Aces on a follow-up mission to investigate, but Captain Doza wasn’t ready to act, and remained unaware of the danger headed their way…

…thanks to Jace Rucklin, who managed to gain consciousness just in time to get that info on the Colossus’ location, before being taken into First Order custody as a presumed accomplice to Tam’s defection attempt. Not that the First Order will believe him. And Kaz, Yeager, and CB-23 are on the run inside the Star Destroyer (which, curiously, still hasn’t been named for us in the series).

So, the task at hand – Kaz, Yeager, and CB-23 have to somehow escape the Star Destroyer with Tam, and the Colossus has to escape yet again from the approaching Star Destroyer. How that unfolds is what we’ll be talking about on today’s (final!) Resistance Briefing. Punch it!