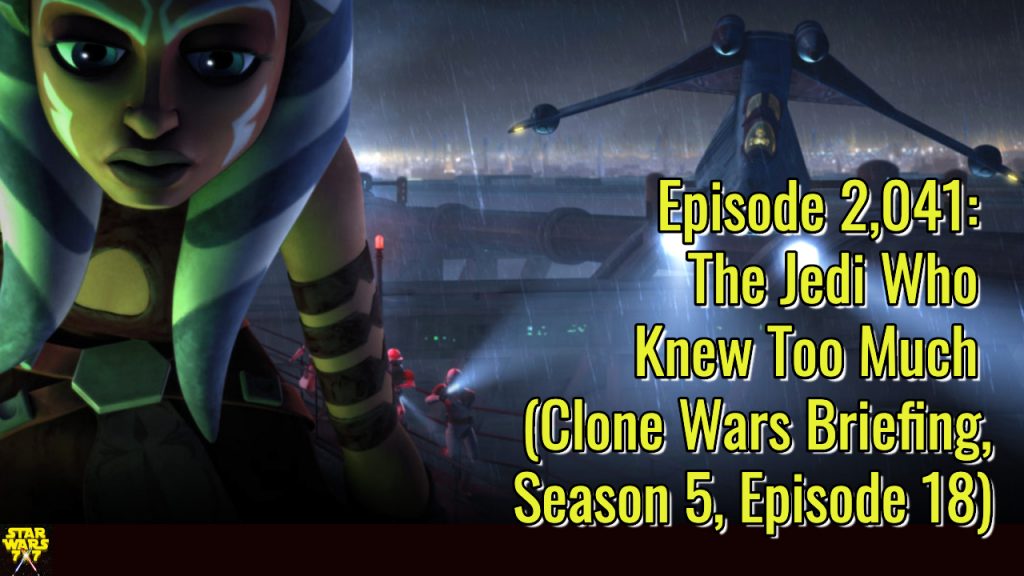 “The Jedi Who Knew Too Much” is the second of a four-part story arc that concludes season 5 of the Clone Wars cartoon series. Today, it’s a Clone Wars Briefing on this episode, episode 18 from season 5.

Influenced by Alfred Hitchcock and Richard Kimble, this episode finds Ahsoka unwittingly maneuvered into a very bad position. Letta Turmond, the prime suspect in the Jedi Temple bombing plot, has been remanded into Republic military custody, but she’ll only talk to Ahsoka. When Ahsoka arrives, Letta will only talk to Ahsoka alone, and tells Ahsoka that she (Letta) was told to reach out to Ahsoka if she (Letta) ever needed help. Do you sense the trouble brewing already?

Letta reveals that a Jedi is actually behind the bombing, because there are unhappy Jedi who don’t like how they’ve become weapons of war in the conflict with the Separatists. But before Letta can reveal the true culprit, she’s Force choked to death by an unknown assailant.

Perfect timing for a smarmy Admiral Tarkin (yes, *that* Tarkin) to arrive, and how convenient, there’s video of the murder, but no audio. So Ahsoka is taken into custody. And later, when she finds a key card has been left behind for her to escape, she REALLY steps into it. Dead clone troopers and her lightsabers at hand, right when more clone troopers arrive? Now she’s framed for multiple murders! She goes on the run, and even Anakin can’t convince her to stop and help sort everything out.

We’ll talk about all of this on today’s episode, and explain the Hitchcock and Kimble references, too. Punch it!